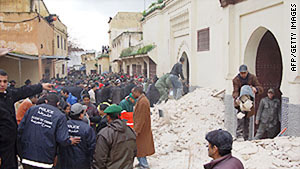 People sift through the rubble of the minaret collapse in Meknes, Morocco, on Friday.
STORY HIGHLIGHTS
RELATED TOPICS

(CNN) -- At least 41 people died when a centuries-old minaret collapsed at a mosque in Morocco on Friday, the country's official news agency reported on Saturday.

The incident took place during Friday prayers at the Bab al-Baradeen mosque in Meknes, a town in northern Morocco located 140 km (87 miles) southeast of Rabat.

At least 75 people have been injured, 17 of them hospitalized. The mosque was packed with worshippers when the accident occurred. Crews continue to look for people in the rubble.

Many people in the country blame the accident on heavy rains, Morocco TV reported. It broadcast video showing dozens of people inside the mosque carrying survivors out of the damaged structure to waiting ambulances.

King Mohammed VI has ordered that the 400-year-old mosque be rebuilt as soon as possible and that its original architecture be preserved, it said.