Explainer: What's behind slaughter in Nigeria? 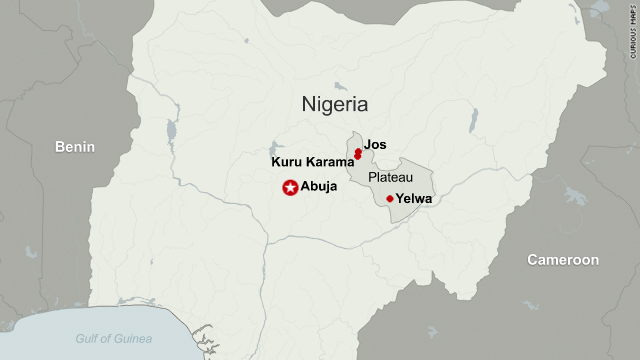 (CNN) -- Gangs of machete-wielding Muslims have been blamed for the weekend slaughter of hundreds of Christian villagers in Nigeria, but analysts say it would be wrong to assume the conflict was rooted in religion.

Men armed with guns, knives and machetes launched a pre-dawn attack on the villages of Dogo Nahawa, Zot, and Ratsat, south of the city of Jos, on Sunday, setting fire to homes and killing at least 200 people.

The government, led by acting President Goodluck Jonathan, has issued a red alert for the region amid fears of revenge attacks and calls for justice by the United Nations and Human Rights Watch.

Who were the attackers?

Survivors told Human Rights Watch that the masked men who stormed their village were speaking Hausa and Fulani, the languages of mostly Muslim nomadic herdsman who originate from the north. Some say they recognized the voices of their attackers as people who used to live there.

The Fulanis are Muslim herdsmen who move long distances to graze their cattle. "You've got Fulanis all the way up and down West Africa, all the way from Guinea which is seen as their ancestral home all the way down into Cameroon. Those who have lived in Jos have tended to mix together with the Hausa population which is predominantly in southern Niger and northern Nigeria," said Corinne Dufka, senior West Africa researcher at Human Rights Watch.

Jos is a majority Christian town dominated by the Berom, Anaguta, and Afisare ethnic groups. They are peasant farmers with strong ancestral ties to the land.

During the country's military rule which ended in 1999, Muslims were appointed as the city's local representative, which bred resentment among the local Christian population, according to Human Rights Watch.

Jos is located in the Plateau State which straddles the majority Muslim region to the north, and Christian-dominated areas to the south. More than 50 ethnic groups reside there leading to flare-ups between rival groups.

What was the reason for the March 7 attack?

Some analysts believe the weekend slaughter was a revenge attack for the killing of around 150 members of the Hausa Muslim community by Christian mobs in Kuru Karama, south of Jos, in January 2010.

Dufka says the January attack may have played a part, but it was impossible to rule out the escalation of a minor, local issue into mass murder. It has happened before.

In September 2001, simmering tension erupted into violence leading to the deaths of 1,000 Christians and Muslims after what seemed to be a relatively minor incident.

A Christian woman had tried to cross the road through a group of Muslims during Friday prayers, according to Human Rights Watch. It came soon after a Hausa Muslim was given a relatively minor post in the local council as "poverty eradication co-ordinator," inflaming local ethnic tensions.

In February 2004, allegations of cattle theft led to the murder of around 700 Muslims and Christians in the city of Yelwa. Again in November 2008, several hundred more people of both religions were killed after disputed local elections in Jos.

Dufka says the government's strategy of creating tolerance through community dialog is clearly not working.

"They have been having community dialog and peace building exercises since 2001. What is really worrying is these cycles of violence are getting closer and closer together," she said.

Human Rights Watch says the violence is a product of "the politics of scarcity."

The ethnic groups are fighting for land, resources, job and opportunities in a region stricken by poverty. IHS Global Insight says economic difficulties have exacerbated past tensions. For example, local tensions increased with rising unemployment after the introduction of Sharia law in some northern states in 1999.

What is the government doing?

The Nigerian government has a poor record of ensuring the perpetrators of mass violence are brought to account. In previous incidences mentioned above arrests have been made, but nobody has been brought to trial, according to Human Rights Watch.

Over the last few months, Nigeria has been in a state of political turmoil following the absence of President Umaru Yar'Adua who left the country last November for medical treatment in Saudi Arabia.

Yar'Adua returned to the country last month, but not before his power was passed to Vice President Jonathan after angry protests in the capital Abuja.

The United Nations has called for authorities to tackle the underlying causes of the tension in the Plateau State.

"The job facing the security forces and the judiciary is extremely sensitive," said U.N. High Commissioner for Human Rights Navi Pillay. "It is important to avoid stimulating new resentments, while at the same time ensuring that those responsible for these atrocious acts do not escape justice."

"Otherwise, there is genuine concern that hostilities could resurrect."