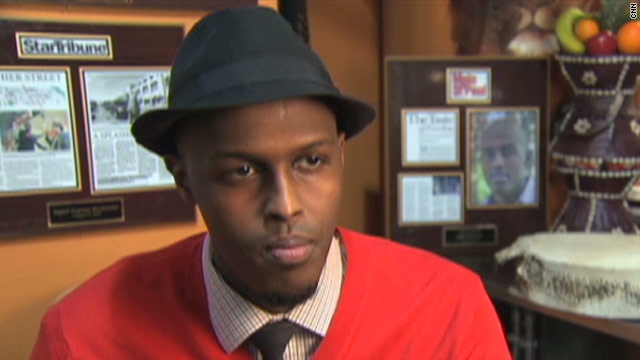 Minneapolis, Minnesota (CNN) -- In the kitchen of the restaurant Safari Express, it's hard to tell what's more powerful, the spicy aroma of the East African food or the fiery passion of the chef, Jamal Hashi.

"I love doing something people take enjoyment from. Making others happy makes me happy even more," said Hashi, a 28-year-old Somali chef who owns Safari Express in Minneapolis, Minnesota. "It lights me up. I love it."

Hashi takes that passion and infuses it into his food, laboring over each dish with an obvious love of culinary composition. Since opening in 2006, Safari Express has become a popular dining destination for not only Somalis, but also Americans with adventurous palates.

Minnesota is home to the largest Somali community in the United States, with more than 30,000 Somalis living in the state. Hashi's fast-food approach to sharing East African cuisine has helped bring the food into the mainstream here.

"I think a part of why I wanted to present Safari Express just to Minnesotans to start with is because I felt that Africa itself is not being presented anywhere in the U.S. It's like our whole continent is skipped over," Hashi said. "And I wanted to show people there's good stuff that comes out of Africa, like the food."

Hashi can find many key ingredients in the internationally styled mall that houses his restaurant -- the Midtown Global Market. But he can have a hard time tracking down everything he needs. While preparing a cream sauce for a dish called "veggie delight," Hashi pointed out some of the limitations.

"Of course, if we're in East Africa, we'd use fresh coconut off trees, but we're here and have to improvise," he said, pouring in a can of coconut milk.

Somali food is a fusion of flavor and regions, thanks to the country's location on the Indian Ocean and Gulf of Aden.

Initially, Hashi worried about how local residents would react to the spicy curries and sauces offered on his menu; he thought the food would overwhelm taste buds in this Midwestern U.S. city. So Hashi decided to tweak the menu, taming the use of seasoning. It wasn't popular.

"People were coming, saying give me something spicier. That's why I came here, I want real African food," Hashi said. "I was surprised. Now we make it original the way we have back home in Africa."

Customers like Martha Erickson couldn't be happier. "We like the Somali food here," said Erickson, who brought her daughter in to sample some of the food.

"We lived in East Africa for four years and this is the best place to get the food we crave and use to love."

While Hashi is enjoying glowing reviews, his life hasn't always been so comfortable.

Hashi was eight when the civil war erupted in Somalia. He was forced to flee and ended up in a refugee camp in Kenya. He and his family eventually made their way to Minneapolis, where life had new difficulties.

"You know it's been a tough journey to be honest with you -- it hasn't been easy at all," he said.

"But I'm glad I was able to see life in Somalia, and going into Kenya and a refugee camp and seeing life in a camp and having nothing -- to later coming here and starting from living off of welfare and living in shelter and later on coming to own a restaurant and creating my own dream."

Now Hashi hopes to pass his passion on to others, like with the cooking classes he offers younger Somalis.

"I owe it to myself, to my parents as well, to pass it on: the stories I was told, the food [I was] given growing up, every little thing," he said. "So today, I think I'm at a point where I have to give it back."