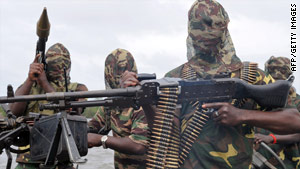 Movement for the Emancipation of the Niger Delta (MEND) rebels have waged war against Nigerian government.
STORY HIGHLIGHTS
RELATED TOPICS

Lagos, Nigeria (CNN) -- Two blasts shook a Nigerian government office Monday shortly after a rebel group sent out a message that it had planted bombs around the building, according to officials.

No officials were hurt in the explosions in Warri in southern Nigeria, said Delta state government spokesman Linus Chima. It was not immediately known whether anyone else was wounded.

The Movement for the Emancipation of the Niger Delta (MEND) claimed responsibility. It was the group's first claim for an attack since calling off a cease-fire with the government in January.

The bombs were mounted in vehicles located about 200 meters (656 feet) away from the building, Delta state Commissioner for Information Oma Djebah said in a statement. Officials were meeting in the building to discuss steps forward with amnesty given to militants who agreed to lay down their arms.

Present at the meeting were three state governors, including Delta state governor Emmanuel Uduaghan, and the minister for the Niger Delta.

"It was a plan to scuttle the peace talks," Chima said about the bombings.

Participants in the conference were evacuated and the event "has been put off," Djebah said without detailing when or if it would reconvene.

"The people of the Niger Delta will not be intimidated or deterred by the act of a few opposed to a peaceful and non-violent approach to resolving the historic grievances of the region," Djebah said. "We assure all that we will not be deterred in our determination to fast-track our development for our people."

In an e-mailed message, MEND had warned of three planted bombs, with the first to be detonated remotely at 11:30 a.m. (6:30 a.m. ET). Authorities have yet to comment on a possible third bomb.

MEND, which has been battling the government for fairer distribution of the country's oil wealth, threatened more violence.

"In the coming days, we will carry out a number of attacks against installations and oil companies across the Niger Delta and will spread out to companies such as Total which have been spared in the past," MEND spokesman Jomo Gbomo said in the statement.

"We hope the actions which will follow will persuade Mr. Uduaghan that we exist outside of cyberspace."

The key militant group in the oil-rich Niger Delta is an umbrella organization of several rebel organizations. It initially called for a 60-day cease-fire in July and extended it in September, finally ordering a unilateral cease-fire on October 25. Now-ailing President Umar Musa Yar'Adua offered amnesty to rebels who laid down their arms, and thousands -- including leaders -- did so.

With the cease-fire, the government looked to broker peace and an end to the disruptions in its oil industry.

Oil bandits have plagued Nigeria for years, attacking pipelines and cutting production by over one million barrels of oil a day. With an economy dominated by oil, Nigeria is the 16th biggest producer of crude oil in the world, according to the CIA's World Factbook.

In 2007, fuel and mining products accounted for 97 percent of exports, according to the U.S. State Department.