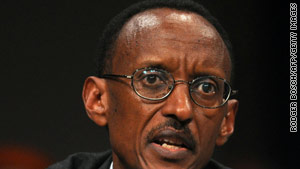 Rwandan President Paul Kagame said his country has made great strides to heal the scars from the 1994 genocide.
STORY HIGHLIGHTS
RELATED TOPICS

"If you are talking about people in the human rights community from outside... I have an issue with this," Kagame said, 16 years after he was hailed as a hero for ending a genocide that killed at least 800,000 people.

"You tend to make a judgment of a country, 11 million people, on what a couple of people have said and (they) don't take into account what Rwandans say."

Kagame added, "Nobody has asked the Rwandans ... it's as if they don't matter in the eyes of the human rights people. It's our own decisions in the end."

He said everyone in Rwanda has to play by the rules and be accountable. "There has to be leadership to make things move in the right direction," Kagame stated.

The RPF took power in 1994 after its army swept into the capital of Kigali and overthrew the Hutu-dominated government responsible for the massacre of hundreds of thousands of Rwandans, most of them members of the minority Tutsi community.

In the aftermath of the 100-day genocide, the fastest in modern history, Kagame transformed his country, turning it into one of the fastest growing nations in Africa and -- in the view of some -- a model of economic and social development.

Kagame said Rwanda has made significant progress in erasing some of the scars left behind after the tragedy.

Kagame insisted he has nothing to do with the continuing civil war in mineral-rich Congo, even though he acknowledged that Rwandan troops intervened there a decade ago in an attempt to stop rebel groups from returning to Rwanda.

The war became the largest and most destructive conflict in African history, costing more than 5 million lives, as various groups and foreign armies fought for control of Congo's land and mineral resources.