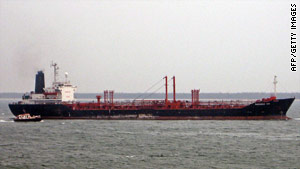 (CNN) -- A ship held captive by pirates in the Indian Ocean since November was released Tuesday after a ransom was paid, the EU's Naval Force Somalia (NAVFOR) reported.

The MV Theresa VIII, a Virgin Islands-owned chemical tanker flying under a Kiribati flag, was hijacked off the coast of Somalia, about 180 miles north of the Seychelles, on November 17.

The vessel has been held in the "pirate stronghold of Haradera, on the Somali coast," EU NAVFOR said on its Web site.

"An unknown ransom was exchanged on the morning of 16 March and the ship is now underway and heading out to sea," the naval force said.

The ship has not requested assistance, but EU NAVFOR said it is continuing to monitor the situation.

Theresa VIII has a crew of 28 North Koreans, the naval force said at the time it was hijacked. It was heading for Mombasa, Kenya.