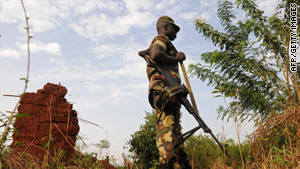 The killings took place in northeastern Congo in December, according to Human Rights Watch.
STORY HIGHLIGHTS

(CNN) -- A December rampage that killed hundreds in the Democratic Republic of Congo went largely unreported because of lack of communications in the remote area, a United Nations official said Sunday.

The Lord's Resistance Army carried out the brutal campaign in northeastern Congo over four days, killing at least 321, according to a report by Human Rights Watch.

Rebels also abducted 250 others -- including at least 80 children -- when they attacked villages in Makombo area, the human rights group said Saturday.

Alan Doss, a United Nations Special Representative for Congo, confirmed the massacre and said the world body was made aware of the attacks in December and confirmed some deaths in January.

"The area is remote, there's no intelligence or communications, we had to cross check," Doss said.

The United Nations cannot corroborate the number of deaths reported by Human Rights Watch, but has confirmed more than 100 killed so far, he said.

"The area is the size of Spain," Doss said. "It has no infrastructure ... we are working on efforts to get better communications to make it less isolated."

The Lord's Resistance Army was initially based in Uganda, but now works near the borders of Central African Republic, Sudan and Congo.

It has been accused of killing, abducting and mutilating scores of people in the past.

In the Congo attack, gangs tied up villagers -- including women and children -- and hacked them to death, Human Rights Watch said.

They also crushed their skulls with axes and heavy wooden sticks, the report said.

It claims its insurgency aims to replace the Ugandan government with a democracy based on the Ten Commandments. President Yoweri Museveni pushed it out of Uganda in 2005.

Five years ago, the International Criminal Court issued arrest warrants for senior rebel leaders for crimes in northern Uganda, but those indicted remain at large.

The Makombo massacre is the deadliest documented attack by the LRA since rampages around Christmas 2008 left scores of Congolese dead. Dozens of other attacks against civilians have been carried out in other areas in recent months, Human Rights Watch said.