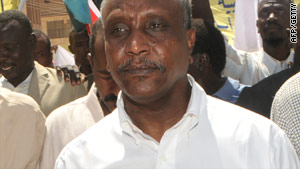 (CNN) -- A major contender in this month's elections in Sudan called Thursday for a boycott in parts of the country, saying the vote is already rigged.

Armin has not withdrawn, as some media reports have suggested, Matthew said.

The move is significant because the elections, scheduled for April 11-13, were supposed to be the first democratic elections involving the whole of Sudan, which has for years been divided along north-south lines.

"The presidential election is already rigged," said Matthew. "We are sure about this."

Matthew accused the party's main rival, the National Congress Party (NCP) of incumbent President Omar al-Bashir, of doing the rigging. He cited that and the security situation in Darfur as reasons to call for a boycott.

He said they are also acting in "solidarity" with opposition groups.

"We have got materialistic evidence," he said. "We were able to find people already holding ballot papers."

An independent political analyst familiar with the election process, who could not be named because he is not authorized to speak publicly on the matter, said the SPLM's move is very risky, especially ahead of next year's referendum in southern Sudan on whether to become an independent country.

"SPLM is taking a big risk," the analyst said. "Their main priority is the referendum in 2011 and by antagonizing the NCP, this aim could be disrupted."

The NCP is using the election to gain legitimacy for the party and the president, and the SPLM's move may end up helping the NCP, he said.

Matthew told CNN the party will continue to contest the election in the south and 10 states in the north.

Opposition groups have consistently asked for the election to be delayed, and the United Nations expressed concern last week about reports that some opposition members and supporters are being harassed, intimidated, arrested or detained ahead of the vote.