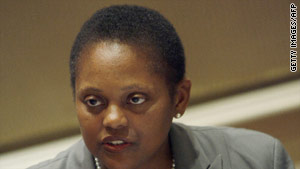 (CNN) -- The European Union on Wednesday pulled its observers from Darfur ahead of elections in Sudan, an EU spokeswoman told CNN.

Darfur activists in France had recently called for the election observers to withdraw, saying the election is being marred by calls for delays and opposition boycotts.

European Union spokeswoman Maria Jose Gomez confirmed that the observers had been pulled, but declined to elaborate on a reason why or whether the move will be permanent.

Sudan is slated to have its first multiparty election since 1986 on Sunday.

The removal of the election observers could bring a halt to the election, said Jendayi E. Frazer, professor at Carnegie Mellon University and former U.S. assistant secretary of state for African affairs.

"I think that it really suggests that the election, especially in Darfur, is not likely to go forward," she said. "I know that the National Congress Party will continue to push for that election and many of the international community would feel that it's unfortunate that the election is not going forward."

But, she added, "I think the situation in Darfur really is not opportune for an election. My understanding is [that] a little more than 100,000 of the IDPs, internally displaced persons, have actually registered, of 2.6 million. ... Really, the conditions are not there."