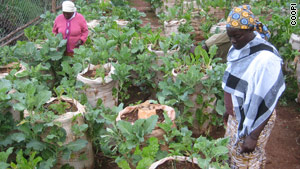 Nairobi's poor working on a mini-farm where the vegetables come in sacks.

Nairobi, Kenya (CNN) -- For centuries Africa has been a rural continent, but there is a steady stream of people heading into the crowded cities -- where many find their new home is in a slum.

In Nairobi's densely populated slums people have hard lives and some are going back to their agricultural roots to get ahead.

The "farm-in-a-sack" project provides poor families with more than 40 seedlings, which can be grown into food in just a few weeks.

Nairobi's Mathare slum is not a paradise for green-fingered ambitions -- the streets are narrow and garbage is strewn everywhere.

But mini-farms are cropping up on spare land.

The project was started by the Italian organization Cooperazione Internazionale (COOPI), which brought in rural agriculturists to teach community groups how to create vegetable farms in the slums.

COOPI provided each participating household in the project with one sack containing soil mix and 43 seedlings to cultivate: 25 spinach, 15 kale, 2 capsicum and 1 spring onion. COOPI also provides the expertise.

The vegetables can be harvested many times for at least one year. The capsicum and spring onions are used for passive pest control instead of chemicals. The spinach sometimes even grows out of the side of the sack.

Nairobi's urban centers are increasingly cramped, so what they try to do is use the minimum amount of space to get the maximum amount of output.

Claudio Torres, from COOPI, said: "There are two effects. There is the main effect that they really have more food and that's like nutrition and micronutrients. But also, as you can see, this brings together the community."

And the city communities are swelling. Currently one-third of Africans live in urban areas but in 30 years half the population is expected to be city dwellers. See how urban populations have exploded

There is food available but it's expensive and the quality is unreliable.

Even schoolchildren are being taught urban farming. Some who have never been out of the city are getting their hands dirty in soil.

The farms can make a big difference. There, COOPI provides basic tools such as fencing, water tanks, spades and hoes. They also become a base for learning good farming practices like water management.

One of the slum farms feeds more than 150 families, who harvest the crops twice a week.

COOPI said 1,000 households were involved in the project as of the end of January 2010 and that will also help improve the nutrition intake of those families.

And it's an elegant solution for Africa's rapidly growing cities.