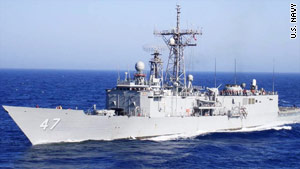 The men are being held aboard the USS Nicholas, the guided-missile frigate they are accused of attacking.
STORY HIGHLIGHTS
RELATED TOPICS

Washington (CNN) -- Five suspected Somali pirates accused of attacking a U.S. Navy ship could be sent to the United States to face criminal proceedings, according to U.S. military officials.

This is only the second time U.S. authorities have brought pirate suspects from Somalia to the United States to possibly face trial.

The five are being held aboard the USS Nicholas -- the guided-missile frigate they are accused of attacking -- off the Horn of Africa and will be transferred to Department of Justice authority in the coming days, officials said.

Although the United States worked with Kenya to create a system to try pirate suspects in that country, the Kenyan government told Washington that its court system is overburdened and cannot accept more cases.

The suspects are expected to be moved to the U.S. base in Djibouti and then flown to Norfolk, Virginia, according to the officials.

The Department of Justice has enough evidence on the five to prosecute them, according to military officials. The expectation is they will be tried in federal court.

They will be moved to Norfolk because the Nicholas is based in the southern Virginia port city, and Norfolk jurisdiction follows the ship wherever it goes, according to the officials.

The five, believed to all be from Somalia, have been held on the USS Nicholas after the ship was fired upon April 1.

The Navy ship reported taking fire from a possible pirate skiff west of the Seychelles, a group of islands off the east coast of Africa, according to a U.S. Navy statement.

The Nicholas quickly returned fire and began pursuing the skiff, which was eventually disabled. A boarding team from the Nicholas captured and detained three people, the statement said.

Two more suspects were captured on a confiscated "mother ship," the statement said.

The Navy is holding 21 pirate suspects on three ships off the coast of Africa, including the five who will be sent back to the United States, according to Navy officials.

Ten are expected to be turned over to Oman because they had attacked an Omani-flagged ship. The United States assisted in that ship's rescue, according to Pentagon officials.

The remaining six suspects could also be sent back to the United states if the federal government finds enough evidence to prosecute them, the officials said.

The last time a pirate suspect was brought to the United States was April 2009, after a dramatic and deadly end to the hijacking of the U.S.-flagged cargo ship Maersk Alabama.

Two of the three pirates holding the captain of the Alabama on a small lifeboat were killed by Navy SEAL snipers.

The third suspect, Abduhl Wal-i-Musi, was taken into custody and turned over to the Department of Justice. He is now in New York awaiting trial.