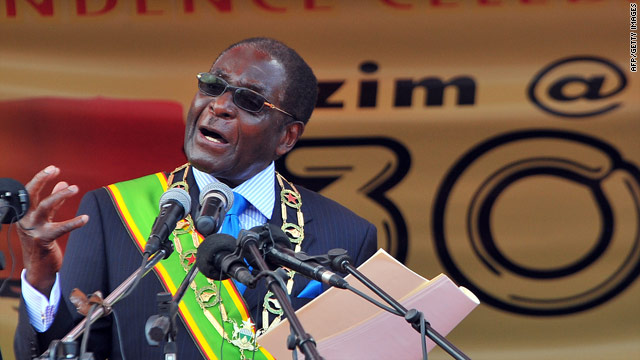 Harare, Zimbabwe (CNN) -- President Robert Mugabe denounced violence and urged Zimbabweans to focus on rebuilding the country in a speech that marked the nation's 30 years of independence from Britain.

Mugabe's speech at a rally Sunday was in addition to other festivities marking his three decades in power. Events included songs, dance and an all-night reggae concert in the capital, Harare.

He called on Zimbabweans to be tolerant, treat one another with dignity, and refrain from engaging in violence, big or small.

"Your leadership in the inclusive government urges you to desist from any acts of violence that will cause harm to others and become a blight on our society," he said. "Don't fight even over girlfriends. The country is full of beautiful women. If you can't get one, come to Mugabe for assistance."

Prime Minister Morgan Tsvangirai also attended the rally but did not speak. Crowds erupted into cheers every time his face appeared on giant screens televising the event in the stadium.

Mugabe, 86, said he was committed to reform, and urged Zimbabweans to support a constitutional reform that would make way for fair elections in the future.

He also decried Western countries for sanctions over accusations of vote rigging in 2008 and human rights abuses. The sanctions include financial and visa bans on him and some of his top government officials.

Before the travel ban, Mugabe and his wife would shop at exclusive stores in Britain, including the famed Harrods in London.

"Those in Europe who yesterday were our colonial masters continue to oppress us, with the help of the U.S.," Mugabe told thousands gathered at a stadium in the capital. "What kind of evil did we commit such that we continue to get accusations from Great Britain, Germany and America?"

Mugabe, who led a guerrilla war against white rule in the country formerly known as Rhodesia, reiterated his controversial stance on land policy. He said his government would continue to seize companies from foreigners and transfer them to locals as part of an effort to empower blacks and broaden ownership.

"The land we have is not for the British," he said. "So remain vigilant because they want to reclaim it through the back. Zimbabwe was attained through blood."

One of Africa's longest-serving rulers, Mugabe was forced into a power-sharing deal with Tsvangirai after chaos erupted in the country following disputed elections in 2008.

The two parties -- Mugabe's ZANU-PF and Tsvangirai's MDC -- continue to wrangle over various issues including reform and leadership positions.

However, the president denied any rows Sunday, and said the rivals were focused on rebuilding the economy.

Mugabe, a former school teacher, has an ironclad grip on his party's reins. Last year, ZANU-PF chose him as its leader for an additional five years.

Despite isolation from the West, Mugabe's supporters include his Iranian counterpart Mahmoud Ahmadinejad, who is expected to visit the country Friday for a trade exposition.