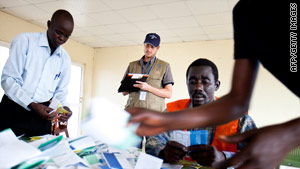 An election observer monitors the counting of ballots at a polling station at a military barracks in southern Sudan.
STORY HIGHLIGHTS

"We note initial assessments of the electoral process from independent observers, including the judgment that the elections failed to meet international standards," a joint statement from the three nations, collectively known as the Sudan Troika, said Monday.

"We are reassured that voting passed reasonably peacefully, reportedly with significant participation, but share ... serious concerns about weak logistical and technical preparations and reported irregularities in many parts of Sudan."

Counting of ballots began Friday, nearly a week after voting for the April 15 ballot began. Sudan's election commission extended the vote for two days past the original deadline after observers complained of technical problems, including ballots being sent to the wrong polling stations and registers that were missing voters' names.

The elections were the first in 24 years.

"We call on the Sudanese authorities to draw lessons from these elections ... to ensure that future elections do not suffer from the same flaws.
--Sudan Troika
RELATED TOPICS

The voting -- for president, parliament and other local positions -- was scrutinized by about 750 international and 18,000 domestic observers.

The election was a key part of a 2005 peace deal, the Comprehensive Peace Agreement, that helped end decades of civil war between the country's north and south. The conflict pitted Christian and Animist southerners against Muslim northerners, leaving more than two million people dead. The peace deal also called for a referendum next year to determine whether the south should become an independent nation.

"The elections in the South experienced a high incidence of intimidation and the threat or use of force," the Carter Center said last week. "There were numerous instances of the Sudan Peoples' Liberation Army intimidating voters and being stationed too close to polling stations. State interference in the campaigns of opposition candidates was widespread in the South."

"This election saw the development of the capacity of civil society: hundreds of groups, encompassing thousands of individual citizens, displayed high levels of commitment and engaged in election observation for many days," the EU statement said.

"This extensive involvement by Sudanese civil society who showed great commitment, particularly in domestic observation, contributed to the transparency of the electoral process."

In the state of Kassala, President Omar al-Bashir held 97 percent of the vote with 350 of 454 polling stations reporting, according to the state-run Sudan Media Center. However, Waziri denied that Tuesday, saying "counting is still going on and tabulation has not yet been done."