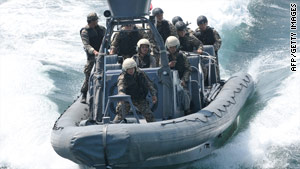 (CNN) -- Piracy incidents are dropping worldwide, but the hijackers are expanding their area of operation, the International Maritime Bureau said in a report issued on Wednesday.

"This marked reduction can be attributed to the continued presence and success of the navies in the Gulf of Aden along with the robust anti-piracy measures adopted by the merchant navy fleet," the report said.

The force said Wednesday that six people had been detained after pirates opened fire on a French military ship about 400 miles off the coast of Somalia.

Pirates opened fire on the supply ship Somme Sunday night after "mistaking [its] silhouette for that of a merchant vessel," the force said in a statement. The pirates left after the Somme fired warning shots, it said.

The French ship later captured two pirates and sunk their mother ship, a vessel used to supply pirate skiffs, and went on to capture four pirates on another vessel, the statement said.

The report said Somali pirates are expanding their presence, spreading from the Gulf of Aden and the southern part of the Red Sea to the coasts off Kenya, Tanzania, the Seychelles, and even Madagascar in the Indian Ocean and Oman in the Arabian Sea.

"Somali pirates are dangerous and are prepared to fire their automatic weapons and rocket propelled grenades at vessels in order to stop them," the report said.

Small boats and skiffs go to sea from the mother ships and permit pirates to travel greater distances.

"Attacks so far from the Somali coast can be possible only through the use of mother ships, some of whom have been destroyed by the navies of the various countries that are operating in the area," said IMB director Capt. Pottengal Mukundan in the report.

"Such positive and robust action by the navies against mother ships, pirate skiffs and pirate action groups have been vital to keeping the attacks under control and must be sustained," Mukundan said.

During the first quarter of 2010, 26 vessels were boarded, 18 ships were fired upon, 12 suffered from attempted attacks, and 11 vessels were hijacked. There were 194 crew members taken hostage and 12 were injured.

Off the eastern and southern coasts of Somalia, there were 18 incidents, including five hijackings and 11 ships fired upon, compared with 21 incidents in the same period last year.

Piracy incidents were also reported in Nigeria, Indonesia and off the coast of Bangladesh.

The IMB is a division of the International Chamber Of Commerce, established to fight maritime crime and malpractice.