By Samson Ntale For CNN 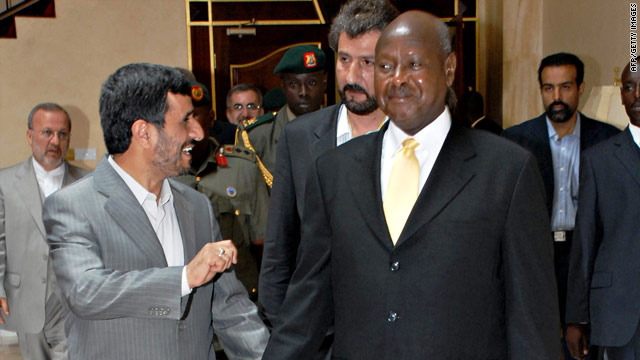 "We have not concluded anything on oil," the Ugandan president said at a press conference as the visit ended, apparently cutting off Ahmadinejad's answer to a journalist.

Iran's government-backed Press TV reported Sunday that the two countries signed several agreements, but did not list oil among them.

During a visit to Tehran last year, Museveni invited Iranian investors to build an oil refinery in Uganda's northwest region, which is believed to hold at least 2 billion barrels of oil.

But on Saturday he said he wanted clarification from the United States about sanctions against Iran.

"We are just students on this matter. It is a debate I have not been following," he said when asked about international pressure on Iran.

The United States and its allies fear Iran is trying to build a nuclear bomb, despite Tehran's repeated denials.

Museveni has recently sought guidance from British Prime Minister Gordon Brown and Iranian Foreign Minister Manounchehr Mottaki "to hear from them why they are in dispute over nuclear use," he said.

"Now I'm going to engage the United States to hear their version, then come back to and consult with our African brothers whom I represent on the U.N. Security Council," Museveni said.

Uganda is a non-permanent member of the U.N. Security Council.

The country's foreign minister, Sam Kutesa, Sunday denied that Iran had tried to use an oil deal to win Uganda's backing on the Security Council.

"No!" he said, adding, "They have no leverage." Kutesa pointed out that many other countries around the world had companies that could built a refinery in Uganda.

"We are not the agents of Iran or anybody else... Nobody can blackmail us about that oil -- including the Iranians," he said.

Museveni said the day before that Uganda will be not be doing the bidding of the United States, either.

"We are not agents of the West on the U.N. Security Council -- we are representatives of Africa and we follow what Africa decides," he said.

The British-Irish firms Tullow Oil and Heritage Oil have already signed contracts with Uganda to develop its oil reserves, the non-profit group Platform said in a highly critical report in February.

The contracts "place profits before people," in the words of the report's title. Platform called for more environmental protections, greater accountability for military forces protecting oil installations, and more equitable distribution of revenues.

"We are not agents of the West on the U.N. Security Council.
--Sam Kutesa, Ugandan Foreign Minister
RELATED TOPICS

Ahmadinejad, who arrived in Uganda on Friday to seek support for his country's controversial nuclear program, said he discussed the sanctions, which he described as a "joke."

"We want Uganda to understand that our nuclear program is for peaceful purposes, but Iran is being denied the right to develop it on baseless suspicions by the West," Ahmadinejad said.

Earlier, during a state dinner, Ahmadinejad accused the West of trying to deny countries the right to nuclear energy.

Museveni, on the other hand, called for a "nuclear weapons-free world," defending nations' rights to have access to nuclear technology, but only for "peaceful purposes" such as medical uses.

"Nuclear weapons are dangerous for humanity -- even more dangerous than all the other previous weapon systems," Museveni said. "We should, therefore, work for a nuclear weapons-free world. This means that those who have these weapons should work to get rid of them under an internationally agreed and verifiable treaty."

Uganda was one of two African nations Ahmadinejad visited this week. He also made a two-day trip to Zimbabwe, where he launched a tractor production line and attended a trade fair.

Zimbabwe President Robert Mugabe said he and Ahmadinejad have the "same policy and same stance -- anti-imperialist, anti-colonialist and a stance to protect our sovereignty and our right of ownership of our resources."

CNN's Ben Brumfield and David McKenzie contributed to this report.