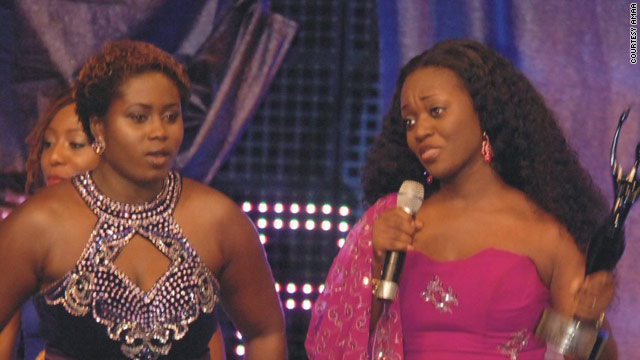 Bayelsa, Nigeria (CNN) -- The stars of African cinema graced the red carpet at the African Movie Academy Awards (AMAA), in Nigeria, showcasing the films that could make waves on the global festival circuit.

The African movie industry gathered in Yenagoa, in the Niger Delta region of Nigeria, for the fifth annual "African Oscars."

Set up in 2005 by former lawyer Peace Anyiam-Osigwe, the awards have helped raise the profile of African movies around the world.

"African film has a hard time in getting recognition in most film festivals [outside Africa]," Anyiam-Osigwe told CNN.

"I think one of the biggest achievements of the AMAA is that the main festivals now look upon us as a selection process, and will pick those particular films that we've looked at and carry them on to the different festival circuits.

"The first Nollywood film that the British International Film Festival showed was 'Irapada,' by Kunle Afolayan, which won Best Indigenous Film at AMAA in 2007. 'The Figurine' premiered at Rotterdam this year and has gone on to other film festivals and 'From a Whisper' traveled the festival circuit based on its win at AMAA."

"The Figurine," a thriller about a sculpture with mystical powers, also by Nigerian director Kunle Afolayan, stole the show at this year's ceremony, claiming five awards in total -- including Best Picture.

Afolayan told CNN, "It feels great -- like we've not worked in vain. It feels like we've opened up a new page in African cinema.

For me, a good story will cut across, not just appeal to Nigerians.
--Nigerian Director Kunle Afolayan
RELATED TOPICS

"For me, a good story will cut across, not just appeal to Nigerians but will appeal to an average film lover, regardless of the language you speak, the continent you are from, or the color of your skin."

In its first years the AMAAs focused on Nigeria's booming movie industry -- known as "Nollywood." But since then they have become more pan-African. The 24 awards at this year's ceremony included nominations from across the continent.

Nonetheless, in terms of sheer output, Nigeria dominates African cinema. Nigeria is the world's second-biggest producer of movies, behind only India. In 2006 it produced 872 movies, compared with 485 major feature films made in the U.S., according to the UNESCO Institute for Statistics.

Nollywood movies are typically low-budget -- often filmed, edited and released within a month. Most don't end up on the big screen. Instead, they are distributed as VCDs costing about $1 to $2, meaning they are affordable for the mass African market.

But it is Nollywood's pioneering use of relatively inexpensive digital cameras instead of costly 35mm film that Anyiam-Osigwe says has been its most important contribution to African cinema.

"There is a new wave of African cinema which is mostly the digital revolution, which has gone on from what Nollywood started in the early 90s," she told CNN.

"Nigeria made people believe they could make films for less [by using digital cameras]. That has spread across the continent and I think that's a good thing, otherwise Africa would not be able to have any kind of production, because it couldn't afford it.

"You see a lot of the older generation of filmmakers from Africa who have made only one short film or one feature-length film in their lifetime, because they have not been able to make up the cost of making another film."

Anyiam-Osigwe said that while some older filmmakers still believe movies should be shot only on 35mm film, directors from Malawi, Kenya, and Johannesburg's "Joziewood" have now made the switch to digital.

She added that while every African country has its own movie-making style, the themes are often universal.

"Everyone tries to do a film that people in their own community will watch," she said. "But I've found that all over the continent we have similar stories -- it's just how we tell them."

Mark Tutton and Christian Purefoy contributed to this report