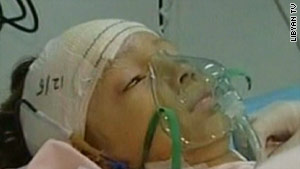 Ruben van Assouw was the sole survivor of the air crash in Libya.

(CNN) -- Some will see it as divine intervention, others a simple quirk of fate, fortune or physics, but one boy's cheating of death in an air crash in Libya this week adds another name to a small roll call of aviation disaster sole survivors.

The boy, identified as Ruben van Assouw, suffered multiple fractures in his lower limbs when the Afriqiyah Airways Airbus A330-200 crashed Tuesday at Tripoli International Airport killing 92 passengers and a crew of 11.

Details of how Assouw, a Dutch national, emerged alive from such an appalling disaster are not yet known, but his survival has already been called a "miracle" by Jerzy Buzek, president of the European Parliament.

Statistically improbable, the fact of his survival is also unlikely to shed any light on the mysterious factors that increase the chances of escaping alive from a plane wreck.

Accounts of how many sole survivors there have been in the aviation industry's relatively short history vary, but so rare is such an event that these are thought to number in their tens rather hundreds.

Most of these escapes have been attributed to unique circumstances, in some cases the sheer resilience and determination of the individual involved. In many cases the survivors, though considered lucky by some, suffered horrific physical and psychological injuries.

Here are a selection of some of the sole survivors from the past five decades.

June 30, 2009 -- Bahia Bakari, a 13-year-old French national, was the only survivor when a Yemenia Airways Airbus A310 flight from Sanaa to Comoros missed the airport and crashed into the Indian Ocean killing 152 people. Bakari was ejected into the water where, barely able to swim, she clung on to a piece of plane wreckage for nine hours. She suffered a fractured collar bone and cuts to her face. Read more

December 24, 2007 -- When a small Cessna plane carrying four Americans crashed in bad weather in high altitude remote jungle in Panama, Francesca Lewis, 13, was found alive two days later when rescuers finally reached the wreckage. Despite being pinned upside down in her seat and dressed only in shorts and a T-shirt, she endured hypothermia and a broken arm. Reports at the time credited her survival through freezing temperatures to piles of luggage that fell on top of her. Read more

July 8, 2003 -- Mohammed el-Fateh Osman, a two-year-old Sudanese boy was reportedly hailed by the country's aviation minister as a "miracle dictated by God" after he survived a Boeing 737 crash in Port Sudan that killed 115 people. The boy, who suffered burns in the crash, was said to have been found lying on a fallen tree by a nomad.

January 11, 1995 -- Erika Delgado, 10, lost her parents and younger brother among the 51 victims of an Intercontinental Airlines DC-9 crash near Cartagena, Colombia, but escaped largely unscathed with just fractured bones. Recalling the incident 25 years later, she tells CNN she regained consciousness half submerged in the Maria La Baja swamp and called for help. Afterward she became a national celebrity, hailed as Colombia's "Little Miss Miracle."

August 16, 1987 -- Shortly after takeoff in Detroit, Michigan, Northwest Airlines Flight 255 hit a light pole, crashing into the suburbs of Romulusa and killing 156 people on board and two people on the ground. Cecelia Cichan, aged four, who had been traveling with her family, survived but with extensive burns. Cichan reportedly remembers little about the crash, but a message attributed to her on a memorial site for crash victims says: "I never go a day without thinking about the people on Flight 255."

January 26, 1972 -- Serbian flight attendant Vesna Vulovic survived a fall of 10,000 meters when the aircraft she was traveling in exploded in midair. Vulovic, whose plunge was logged in the Guinness Book of Records, became a Cold War heroine in the Soviet Bloc, although some have since claimed the feat was fabricated as part of an official cover up. Among the legends surrounding Vulovic was that her first words after being found were: "Can I have a cigarette?"

December 24, 1971 -- Juliane Koepcke was 17 when the Lockheed turboprop she was traveling in with her mother crashed in the Amazonian rainforest killing 91 people. Koepcke describes falling three kilometers strapped into a row of seats before crashing into the jungle canopy. Suffering a broken collarbone, concussion and severe lacerations, she endured a 10-day trek wading through piranha and crocodile-infested rivers to reach safety. She now works as a librarian in Munich, Germany. Read more

December 16, 1960 -- Stephen Baltz, an 11-year-old from Illinois, was the only survivor when two passenger jets collided over New York. Six people were killed on the ground, 83 aboard a United Airline plane and a further 44 on a TWA flight all perished in the disaster. Baltz, who had been aboard the UA flight, suffered burns and smoke inhalation but was able to describe the crash before he died a day later.

Correction: An earlier version of this story misstated Erika Delgado's age and the circumstances of her rescue.