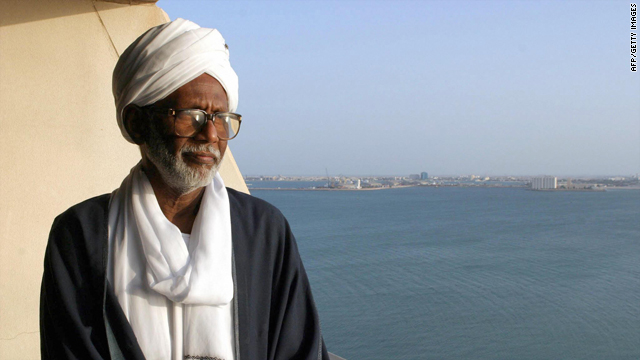 State-run Ashorooq network said al-Turabi, head of Popular Congress Party (PCP), was detained after remarks he made in a local newspaper criticizing al-Bashir's regime and its handling of last month's elections.

Kamal Omar, PCP secretary general said, "the authorities transported al-Turabi to Kober prison in Khartoum for investigation after his arrest around midnight (Saturday)."

CNN could not obtain an official statement from al-Bashir's government on Sunday.

Al-Turabi has been imprisoned a few times within the last few years, the last time in January 2009.

Al-Bashir seized power in a military coup in 1989 together with his then-close ally al-Turabi, who was long thought to be the power behind al-Bashir's regime.

In 2000, the president ousted al-Turabi from his post as parliament speaker and stripped him of his political power. Al-Bashir accused al-Turabi of undermining his power.

The oil-rich African nation has been riven by fighting in Darfur and a civil war between north and south.