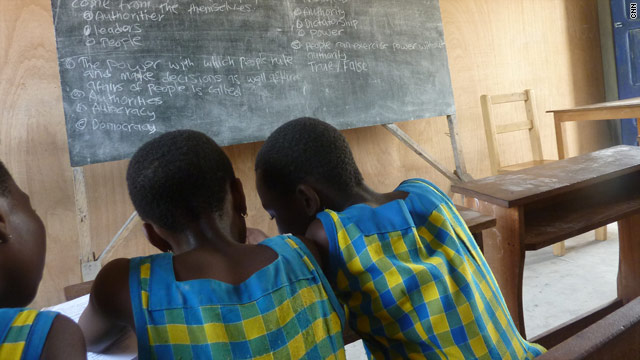 Sankor, Ghana (CNN) -- A former child slave is rescuing victims of child trafficking in Ghana and has built a school to help give them a better future.

Once a child slave himself, James Kofi Annan is turning what would be a crippling experience for many into a drive to stamp out child trafficking.

Annan quit his promising job at Barclays Bank to open Challenging Heights School. At any time his school has several dozen former child slaves, mixed in with 300 other students.

"Every child must go to school," Annan told CNN. "Nobody is free until every child has received at least a basic education. You are free because you are educated, I am free because I am educated."

Annan rescues children from slavery and educates them at the school in Sankor, right in the middle of an area known for children being sold by their parents.

In Ghana it is common for parents to send their children to apprentice with a relative to learn a skill. But sometimes the children will end up caught in slave labor.

Other parents knowingly sell their children to fishermen to wrangle fishing nets 17 hours a day.

More Inside Africa: Hajia Ahmed: Nigeria's only queen in a land of kings

Typically, the parent sells the child for the equivalent of $50. Then the trafficker sells or leases the child for about $300, making $250 dollars a year per child.

Benjamin Tornye calls himself a former trafficker; at one time he bought children from parents and used them on his fishing boat.

Tornye told CNN, "I employed them to dive into the nets whenever there is a problem like the nets getting stuck. I had them free it when it is necessary."

He says he bought 10 children in the time he was a fisherman, which could have earned him about $2500, well above the typical rural income.

Slave-owning fishermen say their nets are easily damaged, have small holes, and catch small fish. They believe little fingers and small bodies are the best to deal with those challenges, whether underwater or on land. And they can put 10 children on a boat, where only five adults would fit.

Some argue that without child labor their catch would cost more, which would endanger their livelihood.

The government has been trying to tackle the problem. Estelle Appiah, of the Ghanaian Ministry of Justice, said new regulations for fishing-net sizes have just been drafted.

You have to alleviate poverty, which is a root cause often of human trafficking.
--Estelle Appiah
RELATED TOPICS

She added that in the last five years two laws dealing with child trafficking had been passed that meet international conventions.

But her experience also makes her pragmatic. "Enacting legislation is not a panacea," Appiah told CNN.

"You also have to educate people that the laws are there to protect them, you have to give them reasons, and you have to alleviate poverty, which is a root cause often of human trafficking. So the law itself is not going to cure the situation."

But for some children sold as slaves into the fishing industry, the scars of forced labor are not just emotional.

Joshua is one of the children Annan has saved from slavery. He has scars where he was hit depending on his so-called mistakes. Scars on the side of his body, because he could not dive as deep as 20 meters, and on the head, for throwing nets the wrong way, he told CNN.

Annan himself says he still struggles for normalcy, more than 20 years after escaping from the fishing villages.

"A few things remain unresolved, but some things are so private it is difficult for one to narrate them," he said.

"Once I'm able to pour them out and lead the team to get more children to be liberated, then I'm on my way to be healed."

Annan has, however, recovered to the point where he sees his former abusers as potential allies, although many of them have already died.

Annan has hope and he is driven -- ready to sacrifice his job and career again, with only one goal in front of him now.

"The wrong in society has to do with the impoverishment of children, exploitation of children, putting children in slavery and in child labor," he said.

"We must resolve this issue, then I can go back to my business. Otherwise we will fight and fight until every child has received this justice."