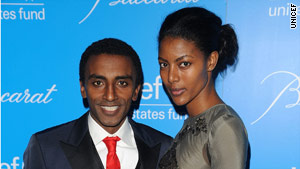 Every week CNN's African Voices highlights Africa's most engaging personalities, exploring the lives and passions of people who rarely open themselves up to the camera. This week the show profiles celebrity chef Marcus Samuelsson.

The Ethiopian-born chef has won three coveted James Beard Awards, an accolade described as "like winning the Olympic gold medal for chefs," and has been celebrated as one of "The Great Chefs of America" by the Culinary Institute of America.

With three restaurants and cookbooks to his name, Samuelsson, 39, is firmly established in the world of haute cuisine, so it was no surprise that he was chosen to cook for President Barack Obama's first White House state dinner.

It's been a whirlwind rise to the top for the chef who says he developed an interest in cooking at just six years old.

But life has not always been easy for him or his family. Born Kassahun Tsegie in a small village north of Addis Ababa, Ethiopia, Samuelsson was three years old when he, his older sister and mother contracted tuberculosis during an epidemic in Ethiopia.

Video: Going back to his roots
RELATED TOPICS

Admitted to hospital, Samuelsson and his sister Linda survived, but his mother was killed by the disease. After their mother's death, a nurse took pity on the young siblings and found an adoption agency to register them, Samuelsson told CNN.

Months later, Swedish couple Anne Marie and Lennart Samuelsson adopted the children and they left Ethiopia for a life in Europe, which at times proved radically different for them.

Looking back on his upbringing, Samuelsson said: "My mother was white, my father was white, we were mixed kids, mixed family. It was the norm, you know. Not until maybe you're in your teens do you really start reflecting on that maybe that's not the norm."

It was only later in life when his sister started to dig into the family history that Samuelsson discovered his biological father in Ethiopia was still alive.

Samuelsson told CNN: "We found him and my step brothers and sisters. This is one of my biggest gifts to have met my birth father and my sisters and brothers and I feel extremely connected to them.

"My father knew we were adopted. He knew that we were in Sweden but he just didn't know where," he added.

It was in his adoptive home that Samuelsson's love of cooking was shaped and developed by his grandmother. He would spend hours in the kitchen with her and by the age of 16 had decided to become a world-class chef.

He attended the Culinary Institute in Gothenburg, and then worked in Switzerland, Austria and France before moving to the United States in 1991 where he was employed as an apprentice at acclaimed Scandinavian restaurant "Aquavit" in New York.

This was to be his launch pad to culinary fame. After four years at "Aquavit," at the age of just 24, Samuelsson was promoted to Executive Chef and his career skyrocketed.

Fifteen years on, Samuelsson has created his own brand, with three restaurants and a collection of cooking books and classes to his name. It's been hard work but Samuelsson credits his success to his origins.

He told CNN: "I always feel like the biggest luxury I have is that I am connected to poverty. I come from a clay house in the country in Addis. No water, no electricity, no nothing ... I think it is my responsibility to represent poverty. Talk about it and also show there's lots of happy togetherness, family and love."

Susannah Palk contributed to this article