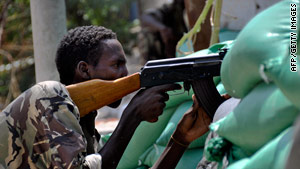 (CNN) -- At least 20 people have died and 55 others have been wounded in continuing fighting in the Somali capital of Mogadishu, an ambulance director said Thursday.

Somali forces have been battling insurgent fighters from al-Shabaab, the al Qaeda proxy in Mogadishu and the rest of the country. The militants are waging a war against the government in an effort to implement a stricter form of Islamic law, known as sharia.

The fighting has displaced an estimated 1.4 million Somalis within the country, and more than 580,000 live as refugees in neighboring countries, the U.N. High Commissioner for Refugees said in May.

Mogadishu is bulging at the seams with more than 350,000 internally displaced people -- many of whom are living in overcrowded conditions and on the street under plastic sheets and makeshift dwellings.

"These are the most vulnerable and utterly dependent on scarce aid the humanitarian agencies manage to deliver and meager remittances from relatives living abroad," the U.N. agency said last month.

"Hundreds of children are forced to beg in the streets of the capital and many women beg in the main markets."

The Horn of Africa nation has not had a stable government since 1991, and fighting between the rebels and government troops has escalated the humanitarian crisis in the famine-ravaged country. The U.N.-backed interim government fights the rebels with the help of African Union peacekeepers.

Recent fighting and displacement has been aggravating an already grave demographic reality: About 43 percent of the Somali population "lives below the extreme poverty line and one in seven Somali children die before the age of 5," the refugee agency said.