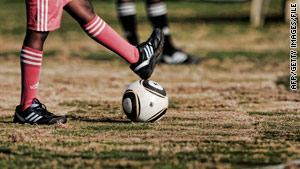 Hundreds of thousands of visitors, including media, are in South Africa for the World Cup which begins Friday.
STORY HIGHLIGHTS

Two of the victims "slept through the whole thing", but a Portuguese photographer woke up as it was taking place at about 4 a.m. local time (10 p.m. Tuesday ET), she said.

A suspect pointed a gun at him and told him to keep quiet, she said.

Police were called after the suspects left and are still investigating, she added. No one has been caught yet.

Hundreds of thousands of sports fans and journalists are descending on South Africa for the World Cup soccer tournament, the biggest sporting event in the world this year. It begins Friday.