2 Norwegians sentenced to death in Congo 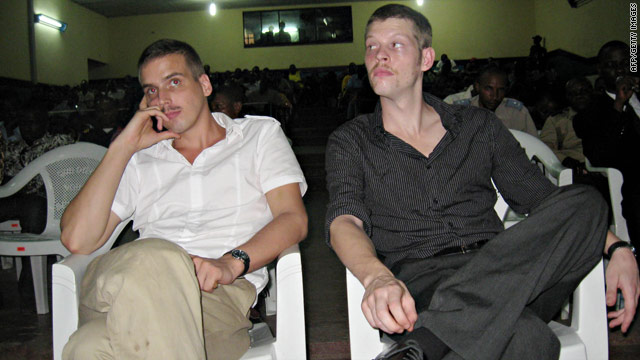 A photo dated December 3, 2009 of Joshua French (R) and Tjostolv Moland in court during their trial in Kisangani.
STORY HIGHLIGHTS
RELATED TOPICS

London, England (CNN) -- Two Norwegians were sentenced to death Thursday in Congo, the Norwegian Foreign Ministry said, after what a human rights group called a "military show trial" that relied on evidence obtained through torture.

Joshua French, 28, who is also a British citizen, and Tjostolv Moland, 29, were convicted of murder, attempted murder, criminal conspiracy, armed robbery, and espionage, according to British legal charity Reprieve.

Both men have maintained their innocence.

Norway and Britain said Thursday they remain opposed to the death penalty and offered support to the men.

The two men traveled into Congo from Uganda on a motorbike trip in April 2009, Reprieve said. When their bike broke down in Kisangani, they hired a car and a driver, and two Congolese passengers joined them, the group said.

Several hours into the journey, in the middle of the rainforest, the driver was shot and killed, Reprieve said. Authorities allege French and Moland killed the driver, but both men maintain they were ambushed by gunmen.

Afraid for their lives, they fled into the dense jungle, Reprieve said. They were arrested separately in May 2009, the group said.

They were first sentenced to death last September. They lost their appeals but the Military High Court in Kinshasa quashed the sentences in April and sent the case back for a retrial, Reprieve reported.

Reprieve said there is no physical evidence against the men and the two witnesses who testified against them were given large sums of money in compensation and have changed their stories "countless" times.

The prosecution has also referred to statements obtained through torture, Reprieve said.

"This farce of a trial would be comical if the stakes weren't so tragically high," said Tineke Harris, the deputy death penalty director at Reprieve. "Each time the military prosecution changes their theory, the witnesses all obligingly change their story."

Harris urged the British and Norwegian governments to press Congo to provide a "credible civilian trial" for French and Moland and arrange for their repatriation.

A spokesman for the Norwegian Foreign Ministry told CNN the death sentences will not take effect until both men have exhausted their appeals.

"Norway is a strong opponent against the death penalty, and we have been communicating this stance to the relevant authorities," said spokesman Kjetil Elsebutangen. "We have received assurances from the authorities that the death sentence won't be carried out and we hold the authorities responsible for the well being of these two."

Norway has told Congo it wants to transfer both men to Norway, but it's not clear under what conditions that can take place, Elsebutangen said.

Britain's Foreign Office said it was "extremely disappointed" that French was sentenced to death.

"We will be doing everything we properly can to support him in the coming weeks and months," said a spokesman, who declined to be named in line with policy. "We are committed to supporting any British national who faces the death penalty and our prime concern in this case is to ensure that no execution is carried out."

Britain has made its concerns clear to the Congolese government, the spokesman added.

Reprieve said prosecution evidence includes photographs of two guns alleged to have been found on Moland's computer, but both guns have been traced to Norway and have never left Norway. The prosecution claims the maps, compass, and GPS system they were carrying proves they were spies, Reprieve said.

After his arrest, French was beaten, subjected to a mock execution, and forced to sign a confession, the group said.

The trial was held in French, a language neither man speaks, and no interpreter was provided for a large part of the trial, Reprieve said.

"For those hearings where an interpreter was present only a small part of what was said was translated, and even then mistakes were constantly made," the group said. "French said that when he told the court he worked in security, the interpreter translated it as he worked as a spy."

Reprieve said the men are also being tried in military courts, in violation of Congo's constitution, which says such courts may only handle cases involving the military or police.

Norwegian authorities deny that the two men, who are former soldiers, were ever involved in spying for Norway, Reprieve said.