The image that changed the course of South Africa's history 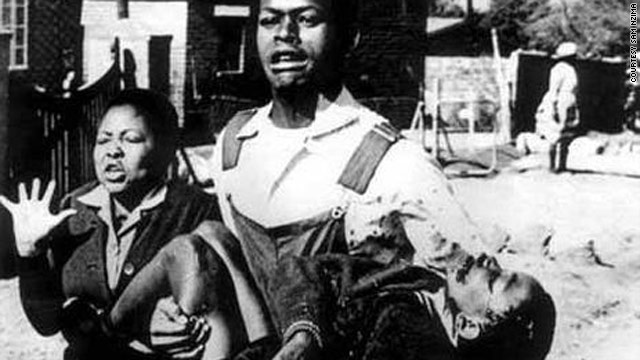 June 16, 1976: A student carries Hector Pieterson, with Pieterson's sister at his side.
STORY HIGHLIGHTS

Soweto, South Africa (CNN) -- It's the iconic image that grabbed the world's attention and helped change the course of South African history.

Thirty-four years ago Wednesday, on June 16, 1976, thousands of black school children in Soweto, South Africa, took to the streets to protest the apartheid education system that obliged them to be taught in Afrikaans.

It was supposed to be a peaceful protest, but the students were met with police gunfire and at least 23 of them were killed.

One of the first youths to be killed was 12-year-old Hector Pieterson.

His death was captured in a photograph that came to define South Africa's liberation struggle.

In the image a fellow student carries Hector, with his 17-year-old sister Antoinette Sithole at his side. For Sithole, the events of that day are still fresh in her memory.

The first thing that I spotted was my brother's shoes, so I quickly ran to the scene and joined them in running.
--Antoinette Sithole
RELATED TOPICS

"The demonstration was meant for high school and secondary schools only, not the younger ones," Sithole told CNN.

"But on the day, as we're protesting with pride, holding placards, singing and chanting, at some point we find younger ones.

"All of a sudden there was a shot. Everybody ran amok in confusion, running for cover, dashing into other people's homes. During that hide-and-seek I saw my younger brother on the opposite side of the pavement.

"There was another shot, so we had to go back into hiding and unfortunately we went two separate ways. When I came back to the pavement he was nowhere to be seen."

Then, Sithole saw a crowd of students gathered around a man who was carrying a child.

"The first thing that I spotted was my brother's shoes, so I quickly ran to the scene and joined them in running," she said.

"So we're running and I'm trying to explain myself: 'This is my brother, who are you? Where are you taking him?' The man never said anything.

"Then I saw blood coming from the side of the mouth and I panicked. My voice was harder -- 'who are you, can't you see my brother's head?' He never said anything, just keep running."

The shooting sparked off days of protests known as the Soweto uprisings, which many regard as the beginning of the end of the apartheid regime.

June 16 is now a national holiday in South Africa, known as Youth Day.

Now a guide at the Hector Pieterson memorial in Soweto, Sithole hopes to teach visitors about the sacrifices made there.

"Most people know our history, but don't fully know it," she told CNN. "So they're coming here and we sort of embrace with them what really happened because they'll be seeing people like me, other people sharing the same story.

"It makes us proud and brave to talk about our history. And the very same history brought the World Cup today."

For Sithole, talking about the past isn't a burden, but rather a responsibility she feels compelled to take on.

"I never really understood -- it took me years -- but now I'm proud standing here. Maybe it's like I'm a channel of the ancestors. I was left behind to tell the story."