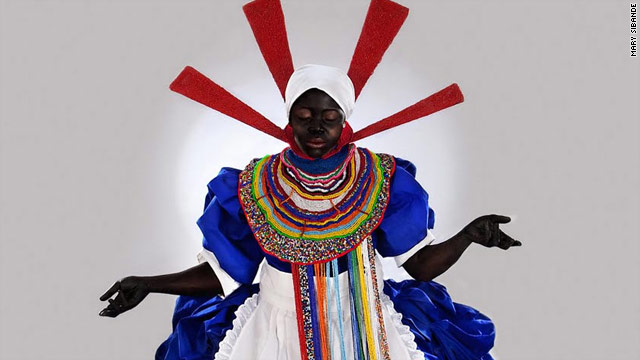 A work by South African artist Mary Sibanda is among those attracting global attention.
STORY HIGHLIGHTS

South Africa, in particular, has seen a significant rise in prices paid out for major works, according to Strauss and Co, a Johannesburg auction house selling 20th Century art.

Prices for major South African art are estimated to have increased by over 500 percent in the past five to 10 years, according to the auction house.

In recent years a new world record was set for a still-life by a South African artist when a stunning piece by Irma Stern sold for more than one million dollars.

Only halfway through the year, Strauss and Co. says it has already earned more from sales this year than in the whole of 2009.

Among the beneficiaries is Johannesburg-based William Kentridge, who is perhaps the closest the African art world has to a rock star.

He is one of Africa's most commercially successful artists and his work is in demand around the globe.

But he acknowledged that the market for contemporary art is small. "A lot of work gets sold to institutions and wealthy patronizing collectors -- patrons of the art," Kentridge told CNN.

"The number of people that actually seriously collect, and are interested, and travel to exhibitions, and are knowledgeable about it is tiny. But they form the bulk of the collectors of contemporary art."

In South Africa the pool of people buying serious art is even smaller. Most are white businesspeople. The country's emerging black middle class and wealthy have not yet started buying South African contemporary art in the same way the newly monied classes snapped up art in China and India.

Ross Douglas organizes the Johannesburg Art Fair. He told CNN, "What we saw in China and India was that they suddenly got very rich and they started buying contemporary art at the same time the international art market started buying it. And one supported the other.

"In Africa there is very little local buying of contemporary art and that's why artists go abroad. But that will change, slowly."

There are signs that change is already happening. Young South African artists like Lawrence Lemaoana and Mary Sibanda earn a living from their art, which didn't happen five years ago.

"As an artist you have to work extra hard," said Sibanda. "You have to keep reinventing yourself because you can't keep showing the same thing over and over again."

They rely on galleries and the Johannesburg Art Fair -- the only major art fair in Africa -- to introduce their work to South Africans.

Lemaoana told CNN, "It is a great platform for introducing the normal public into walking into a gallery. Because one of the things we struggle with in South Africa is the idea of culture, and how culture is limited to a few people.

"I think it's an interesting way of inviting Joe Soap to walk in and maybe buy an artwork."

Before the economic meltdown, South African corporations such as big banks or mobile phone companies were the main investors in local art.

But gallery owners say those companies have cut back in the past two years, reasoning it might be difficult to explain to shareholders why they were buying art in the middle of the global credit crunch.

Those sentiments have been echoed in global art capitals such as New York and London.

"There was a huge bubble of extraordinary prices being paid for contemporary work, and that took a knock," said Kentridge.

"It was astonishing how short that was. I think what happens when you have the crash in the art market the way you had in the late 1980s.

"There was a period in which it was very easy for galleries to survive and make money and do well; it's much harder now."

But at the top end of the market at least, things seem to be picking up. Which could be good news for those who were early investors in mid-20th century South African art.