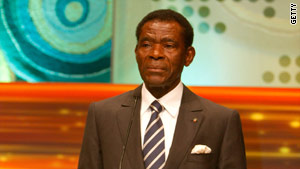 Cape Town, South Africa(CNN) -- The president of oil-rich Equatorial Guinea pledged a series of reforms Monday, saying he wants to ensure peace, political stability and transparency in the central African nation, ranked among the world's most corrupt.

"However," President Teodoro Obiang Nguema Mbasogo said, "we must remember that Equatorial Guinea is a relatively young nation, inexperienced and, just like a ship, our comprehensive program of reforms will take some time to turn us around, in time for what is called Horizon 2020."

Obiang, who seized power in a 1979 coup, was re-elected in November in a vote that human rights groups criticized as unfair.

Obiang won with 96.7 percent of the vote. The government said at the time that the elections unfolded "in an atmosphere of tranquility and peace."

Human Rights Watch, however, said after the election that conditions in the country "cast serious doubt about the credibility" of the vote.

Transparency International, a nongovernmental organization that examines corruption worldwide, has ranked Equatorial Guinea as among the world's most corrupt countries.