Rock art of ages left by a vanished people

By Hamilton Wende and David McKenzie 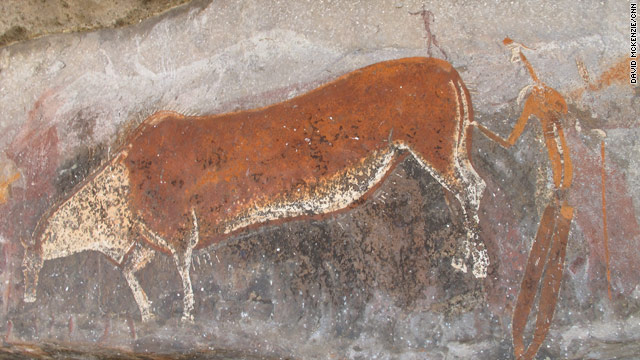 Kamberg, South Africa (CNN) -- Sunlight sparkles through the drops of water that tumble off the edge of the cliff. Painted on the rock face behind the tiny waterfall are a pair of faded eland, the largest antelope in Africa. Behind them are two barely visible human figures.

"This is a sacred place," says Raphael Mnkhati, a guide from the Kamberg Rock Art Center. "Water is important for all life, and it was important for the people who lived here."

The tiny cave behind the waterfall is only one of thousands of such hidden, secret shelters in the Drakensberg-Ukahlamba Mountains of South Africa. They were the home of the Bushmen, the original inhabitants of this country, who fled to these mountains to escape other Africans moving down from the north of the continent and white settlers moving up from the Cape. The Bushmen were wiped out in the countless conflicts that resulted.

Read previous David McKenzie and World Cup in a Winnebago

Today they are a vanished people, but their legacy remains in the vibrant paintings they left behind on the rock walls of their shelters. "It's hard to date these paintings," Raphael explains. "Some could even be as old as 8,000 years."

Scattered throughout these mountains are some 60,000 individual images, visible at about 600 different sites. The artists used the blood and fat of the eland as well as whitened clay, bird droppings and charcoal as pigments. The delicate lines of the figures were etched with twigs, porcupine quills and ostrich feathers.

Scientists believe that these figures were created by the Bushmen while they were in trance states, and that the paintings reflect the people's deep reverence for the beauty and power of the natural world that surrounded them.

Higher up the mountain, hidden in a giant overhang at its very crest, is a remarkable fresco of hunters, antelope and mythic figures, known as therianthropes, which are part-human, part-animal beings.

The paintings stretch in a long gallery across the rock face that extends for at least 30 meters under the stone roof. It frames a spectacular view of the tall peaks and the distant valley far below.

"You are not allowed to touch anything, or to collect anything here, it's a like a church," Raphael tells us. "And this is why it is important for the Bushman people. Still today many people take their shoes off when they visit here -- as a sign of their respect."

One of the most well-preserved and mysterious panels in the Kamberg series shows a mythical human-like figure tugging the tail of an eland. Some scientists believe that this a sign of human recreation, almost sport, created by the artist -- or artists -- in a transcendent state of consciousness.

Raphael has been coming here for years, and is now studying rock art through university, but the beauty of this ancient gift left behind by lost generations has not faded for him.

"The Bushmen are very special," he muses while looking out over the wide landscape that stretches out below, "because they were living here, peacefully, in the mountains. We are all from the same origins. I feel very proud about this place and of the rock art that is here."