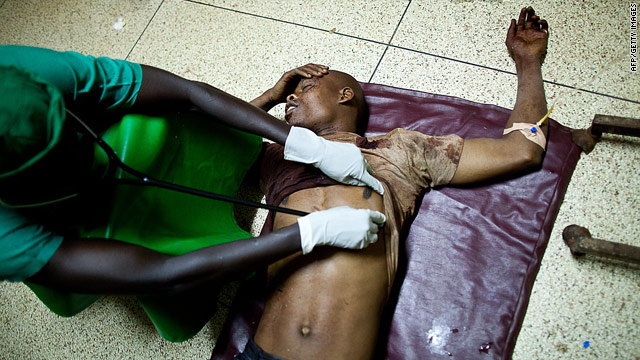 A doctor treats a bombing victim in Kampala, Uganda, on Sunday. The death toll in the attacks is now at 76.
STORY HIGHLIGHTS

Washington (CNN) -- A State Department spokesman put the death toll from Sunday's trio of bombings in Uganda's capital city of Kampala at 76 Tuesday, raising the count by two.

"As of today, we understand, the number killed is 76, including the one American that has been identified," P.J. Crowley told reporters.

The five wounded Americans have been evacuated, two to Johannesburg, South Africa, and three to Nairobi, Kenya, he said.

Diplomatic security agents and "a small number" of FBI agents were in the city, he said. A larger FBI contingent was expected to depart Tuesday for Uganda at the request of Ugandan authorities to help in the investigation, he said.

The increased death toll came a day after a Somali Islamist militant movement claimed responsibility for the bombings at two locations where crowds had gathered to watch the World Cup final.

"We are behind the attack because we are at war with them," Al-Shabaab spokesman Ali Mohamoud Rage told reporters in Mogadishu, Somalia.

Rage said young suicide bombers carried out the attacks but did not specify their nationalities.

A day of national mourning for victims of the bombings began Tuesday -- all flags on public buildings were ordered lowered to half-staff.

Eighty-five people were wounded in the Ugandan blasts, Kayihura said.

"This incident shows that it was terrorism," he said. Kayihura said he could not confirm that Al-Shabaab was responsible, but said the nature of the explosives used was consistent with the group's way of operating.

In addition to Ugandan victims, fatalities included one Irish citizen, one Indian, one American and 11 people who were either Ethiopian or Eritrean, according to the Ugandan government.

The blasts struck within 50 minutes of each other. The first one struck an Ethiopian restaurant in a neighborhood dotted with bars and popular among expatriates. Two others exploded at a rugby center.

The U.S. Embassy confirmed the death of the American. An organization that works with children in Uganda identified him as Nate Henn.

Crowley said Monday that the State Department has no reason to doubt Al-Shabaab's claim of responsibility, saying the "evidence so far at the attack scene would suggest an Al-Shabaab connection."