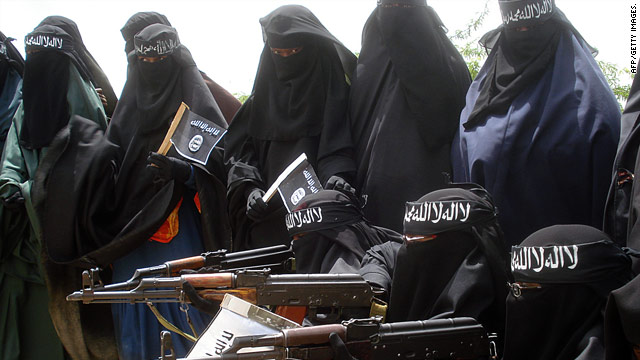 Women pose with weapons at an Al-Shabaab demonstration against the Somali government in Mogadishu.
STORY HIGHLIGHTS

(CNN) -- Al-Shabaab, the Somali militant group that claimed responsibility for Sunday's deadly attacks in Uganda, is promising to "unleash a new tide of terror," but Uganda's leader has vowed to "deal with the authors of this crime and fight back."

"This is only the beginning," Al-Shabaab warned Thursday in a statement on the internet.

Al-Shabaab claimed responsibility for the bombings that killed 76 people in two locations in the Ugandan capital of Kampala. The attackers struck an Ethiopian restaurant in a neighborhood dotted with bars and popular among expatriates. Two other bombs exploded at a rugby center.

Police in Uganda have reported arrests in connection with the bombings, which also wounded dozens of people.

Al-Shabaab had said it is waging war "against 6,000 collaborators," a reference to the African Union peacekeeping force that includes Ugandan troops and warned Ugandans to refrain from involvement in Somalia. Burundi is a main troop contributor nation, and it has been threatened, too.

Speaking Wednesday night in a televised state of the nation address in Uganda, President Yoweri Museveni said that "we shall weed out any of these elements and loopholes which these people used."

"The terrorists were able to carry out the attacks due to the laxity and liberal atmosphere in Uganda on the part of the security and general public," he said.

"We are going to go on the offensive and get these terrorists," he said, calling them "backward and cowardly."

"Why do you attack innocent people watching football?" he asked.

He urged Ugandans not to make blanket condemnation of Somalis in Uganda as terrorists, but said that those connected to the terrorists will be profiled, arrested, charged and if found guilty through the judicial process, will be hanged.

He also vowed the upcoming African Union summit in Kampala will take place this month and he wants to bolster the AU peacekeeping force to a total of 20,000. A Ugandan army spokesman, Lt. Col. Felix Kulayigye, told CNN Thursday that the African Union mission for Somalia currently has 5,200 troops in Somalia -- 3,200 Ugandan troops and 2,000 Burundian.

"The terrorists attacked unguarded pitches, but the summit will be well-guarded. In any case, even the pitches are now well-guarded," he said, referring to soccer fields.

Al-Shabaab has been fighting Somalia's U.N.-backed transitional government for almost four years and had previously threatened attacks on Uganda.

Somalia has had no effective administration since Mohamed Siad Barre's regime collapsed in 1991.

In Nairobi, the Kenyan government said Thursday that a Ugandan national who had been working with Al-Shabaab gave himself up to police recently.

It's unclear whether he had any ties to the bombing but said he didn't want to work with the militants anymore. Authorities handed him over to Ugandan authorities Tuesday, a government spokesman said.

Kenya said it also bolstered its troop presence along the Somali-Kenyan border in the aftermath of the Kampala attack. Kenya borders Uganda and Somalia.

It emerged in 2005 as the militant youth wing of the Islamic Courts Union, which briefly controlled much of the Horn of Africa nation before being ousted in 2006 by troops from neighboring Ethiopia.

The U.S.-backed Ethiopians remained until early 2009, when the transitional government took tentative control, clinging to a small part of the capital, Mogadishu, and were supported by the AU peacekeepers.

Senior U.S. administration officials who briefed reporters on Tuesday about the attack said the group has threatened the United States and committed violent acts in Somalia since its formation. It has killed peace activists, aid workers, prominent officials and journalists.

The African Union peacekeeping mission has lost about 35 soldiers there, one of the officials said.

"This would be, though, the first terrorist operation that Al-Shabaab carried out outside of Somalia," he added.

Al-Shabaab has ties with Osama bin Laden's al Qaeda terrorist network, the officials said, and the United States has labeled the movement a foreign terrorist organization. They also said that people in Al-Shabaab have contacts with al Qaeda groups in East Africa and the Arabian Peninsula.

"Its agenda is very similar to al Qaeda's agenda," an official said.

As for the Kampala attack, the officials said they had received no warning about the attack.