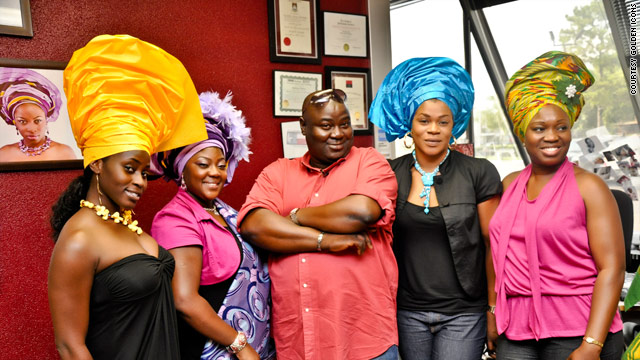 Editor's note: CNN Marketplace Africa offers viewers a unique window into African business on and off the continent. This week the show profiles Nigerian businessman Segun Olaleye, commonly known as Segun Gele. He has turned tying Nigerian headwraps into a promising business and an artform.

Houston, Texas (CNN) -- Segun Gele, or to use his full name Hakeem Oluwasegun Olaleye, is a man making a name for himself in a woman's world.

The Houston-based businessman has made an artform out of tying a gele -- the gravity-defying headwraps worn by Nigerian women.

To meet him is to understand how he became a celebrity in a field only a few years in the making. He's not only a vivacious self-promoter; he's also clearly thrilled to find himself making money doing something that comes so naturally to him.

Watching Segun Gele whip the material into graceful folds and arcs in less than five minutes, you know he is the master.

Geles come in different fabrics such as damask, brocade and "aso-oke" (hand-woven fabrics popular for Yoruba special occasions in Nigeria). The most popular fabric among Nigerian women is a metallic fabric made from jacquard.

They have been worn by Nigerian women for generations, but in recent years has become the ultimate fashion accessory for important parties and events in the U.S., something that Segun Gele partially credits himself for.

He says when he moved to Houston, Texas in 2003 from Nigeria, many Nigerian women had stopped wearing their gele because it was just too difficult to tie by themselves. To Segun Gele, this was a great tragedy.

He first noticed he could turn his skills into a promising business when he offered to tie a woman's head wrap at a friend's wedding.

Within minutes, he had whipped the two-yard fabric into a headturning, vertiginous shape that left other women at the party impressed. Before long a queue had formed and he started charging $7 a piece to tie gele at the wedding, Segun said.

Over time his rates grew to $10, then $15, and now he rarely ties wraps at parties but reserves his services for weddings or other special occasions.

"In the past, I used to have so many people. I think I had about 20, 30 people standing in the line to have their hair tie tied. But it got to the stage where it was overwhelming," he said.

Segun Gele now charges $650 to tie wraps for brides and their party for Houston weddings, and $1,000 plus hotel, rental car and airfare for out-of-town weddings.

It's the only business he's done since he moved to the U.S., and one that's showing no signs of slowing down. He has students that pay to train with the master, flying in from around the U.S. and London.

So long as gele remains a fashion statement for Nigerian women, Segun Gele is sure to remain king of his domain.

CNN's Stephanie Busari and Agnes Teh contributed to this report