African Union summit starts in Uganda a week after bombings 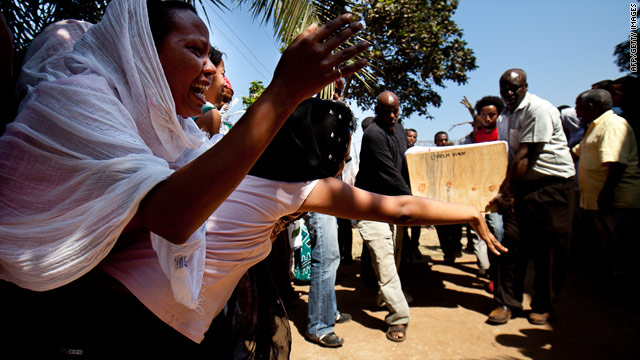 (CNN) -- The African Union summit started in Uganda on Saturday, nearly a week after triple bombings in the nation's capital killed more than 70 people.

The summit will address various issues, including health, infrastructure and food security. It will also tackle security concerns in Somalia, Uganda's foreign ministry said in a statement.

Islamist militants have been battling Somali forces for years. The horn of Africa nation has not had an effective government since 1991.

The Somalia-based Al-Shabaab rebels claimed responsibility for the bombings that killed 76 people Sunday in Kampala.

The victims were watching the World Cup at two locations -- a restaurant and a rugby center.

"The terrorists attacked unguarded pitches, but the summit will be well guarded," said Lt. Col. Felix Kulayigye, a spokesman for the Ugandan army.

Heads of state from many of the 53 nations in the African Union are expected to be at the summit.

Al-Shabaab had said it is waging a war against the African Union force, and has warned Uganda to refrain from involvement in Somalia. It has also threatened Burundi.

Ugandan police said they have arrested nine people in connection with the Sunday bombing and are questioning others. Police hope to release more information about the arrests soon.

Uganda's inspector general of police Kale Kayihura says that all those arrested have links to Al-Shabaab.

"Cowardly acts of the terrorist group of July 11th should not be allowed to scare peace loving people from attending the A.U. summit whose theme is aimed at addressing critical challenges facing Africa," the Ugandan foreign ministry said.

A youth forum on maternal and children health kicked off the event Saturday.

Official events start Monday in Kampala, with the summit scheduled to end on July 27.

CNN's Faith Karimi and Samson Ntale contributed to this report.