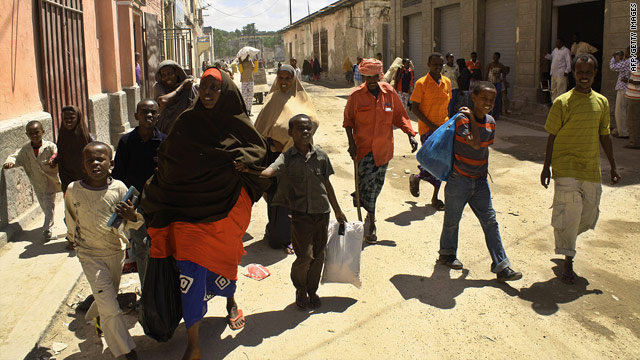 Residents of Mogadishu flee with their belongings from Hamarweyne District of the embattled Somalia capital on July 19, 2010.
STORY HIGHLIGHTS
RELATED TOPICS

During the prior 24 hours, 25 people died and 83 were wounded -- including schoolchildren -- in the fighting between Somali government forces backed by African Union Mission forces and Al-Shabaab fighters, said Ali Muse, an ambulance director.

But Abdurisaq Qeylow, a government spokesman, denied civilian areas in Mogadishu had been shelled.

The fighting broke out when Al-Shabaab fighters attacked the bases of Somali government forces in Boondhere district in Mogadishu.

There was no immediate comment from a spokesman for the African Union Mission in Mogadishu.

Both Al-Shabaab and the Somali government have claimed victory in the fighting in North Mogadishu, where people were fleeing from their houses to the outskirts of the city.

Somalia has been without an effective central government since Siad Barre was ousted as president in 1991.

The Office of the U.N. High Commissioner for Refugees estimates that more than 200,000 Somalis have been forced to flee their homes this year, with most remaining within the country's borders because of heavily guarded checkpoints and difficulties in getting transportation out.

"Those who reach safety abroad speak of a dire situation inside the country," U.N. refugee agency spokesman Adrian Edwards said in a written statement.

He said insecurity and lack of access were making it hard for humanitarian agencies to reach millions of people in need.