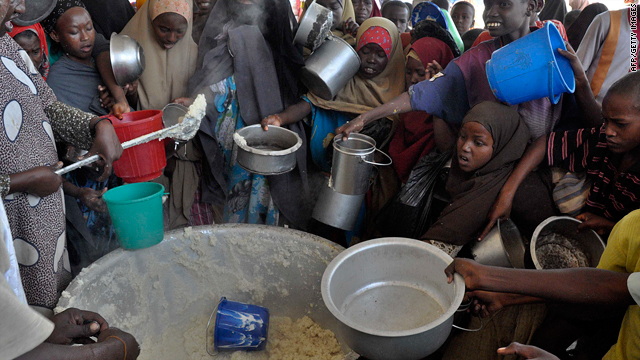 United Nations (CNN) -- Somalia is "one of the world's most complicated humanitarian crises," with 40 percent of the population relying on United Nations aid for survival, the U.N.'s envoy to the troubled African nation told the Security Council Wednesday.

The country's central government is extremely weak and the drought-stricken nation is essentially lawless. What security does exist is provided by militias and rebel groups. And clashes between rebel groups and government forces have been especially fierce since 2009, when the current moderate president came to power.

Bowden emphasized the importance of continued U.N. funding to "sustain assistance to this most acute humanitarian crisis."

Numbers tell a story of misery. Some 1.2 million Somalis have been forced from their home villages or regions. About 200,000 were forced from the capital of Mogadishu this year alone. Since March, the country has suffered 3,000 conflict-related casualties. One in five Somali children is undernourished.

Much of the country's violence is fueled by the need for basic resources, Bowden said. Food riots have "been the pattern of what's happened in Mogadishu for the last 18 years," he told the 15-member Security Council.

Bowden was pressed by council members on recent allegations that aid to Somalia has been siphoned off by Al-Shabaab, an al Qaeda-affiliated Somali group. Bowden said that allegations of misuse were taken very seriously and officials are addressing the problem.

Bowden's findings were not totally negative.

Thanks to U.N. aid, 1.3 million Somalis now have access to clean water and vaccination campaigns are continuing even in areas occupied by insurgent groups, Bowden said. Somalia has been kept polio-free at a time when many other African nations are seeing a resurgence of the disease, Bowden said.