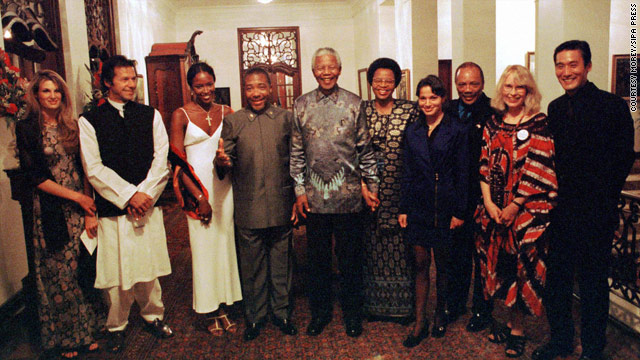 The Hague, Netherlands (CNN) -- Supermodel Naomi Campbell took the stand at the war crimes trial of Charles Taylor on Thursday as prosecutors tried to undermine a key element of the former Liberian president's defense.

Campbell told the special tribunal that she received a gift of "dirty-looking stones" that she assumed was from him.

Prosecutors are trying to prove that Taylor handled uncut diamonds -- which do not glisten like polished ones -- that fueled a brutal civil war in Sierra Leone when Taylor was president of neighboring Liberia.

The supermodel was handed the stones following a dinner hosted by Nelson Mandela in 1997, she said.

"When I was sleeping, I had a knock on my door. I opened the door and two men were there. They gave me a pouch and said, 'A gift for you.'"

The men didn't introduce themselves or say anything else, Campbell said.

The next morning, she opened the pouch and saw a few "very small, dirty-looking stones."

She gave them to a friend to auction for charity, she testified.

Video: Naomi Campbell talks diamonds
When I was sleeping I had a knock on my door. I opened the door and two men were there. They gave me a pouch and said, 'A gift for you.'
--Naomi Campbell
RELATED TOPICS

Future witnesses at the war crimes trial are likely to dispute Campbell's story, prosecutors said after her testimony.

"Two other witnesses will also testify about these events.... there are significant differences between those accounts and Ms. Campbell's account," the prosecution said in a statement. It did not name the witnesses, but court papers show prosecutors plan to call Campbell's former agent Carole White and the actress Mia Farrow.

He has testified that he never handled the precious stones.

Campbell shared the story of receiving the stones with White and Farrow at breakfast, she testified Thursday.

"Well, that's obviously Charles Taylor," one of them said. Campbell didn't recall who said it. Then, one of them added, "Well, obviously, they are diamonds."

Campbell said she assumed the stones came from Taylor.

Prosecutors asked the United Nations-backed Special Court for Sierra Leone in May to order the supermodel to testify about allegations she got a "blood diamond" -- also known as a "conflict diamond" -- from Taylor. Campbell did not want to be involved in the trial, but was subpoenaed on July 1.

Campbell said she didn't keep the stones. Instead, she passed them on to a friend, Jeremy Ratcliffe, she said, and asked him to use the stones in a charity auction to raise money for underprivileged children.

Ratcliffe is a trustee of the Nelson Mandela Children's Fund, which denied hours after Campbell's testimony that it had ever received diamonds from her.

"I can categorically state that the NMCF has never received a donation of a diamond or diamonds from Ms. Campbell or anyone else," the fund's chief executive, Sibongile Mkhabela, said in a letter to the court Thursday. "It would have been improper and illegal to have done so," she wrote.

Campbell said on the stand she believed Ratcliffe still had the diamonds.

Prosecutors, who say that Farrow confirmed that Taylor gave Campbell a diamond, also want to call the actress and White to testify, court papers show.

Taylor, 62, was president of Liberia from 1997 to 2003. The war crimes charges against him stem from the widespread murder, rape and mutilation that occurred during the civil war in Sierra Leone, fought largely by teenagers who were forced to kill, given addictive drugs to provoke violent behavior, and often instructed to rape and plunder.