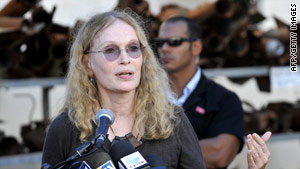 Her appearance is scheduled for Monday, according to the United Nations.

Campbell said she received "dirty-looking" uncut diamonds as a gift after a dinner hosted by Nelson Mandela in 1997.

Taylor was a guest at the dinner party.

The supermodel said she did not know who sent her the stones, which were delivered to her room in Pretoria late at night.

She said she was not aware they were diamonds at the time.

"I'm used to seeing them [diamonds) shiny and in a box," she testified Thursday.

The next morning, Campbell added, she discussed the gift with Farrow and her then-agent, Carole White. The latter is also scheduled to testify.

Jeremy Ratcliffe, a friend of the supermodel, handed over the diamonds to South African police recently.

Campbell said she gave the diamonds to Ratcliffe, a trustee for a Mandela nonprofit at the time, because she wanted them to go to charity.

A so-called blood diamond is mined in war zones and used to fund rebels and warlords. The stones have fueled bloody conflicts in Africa for more than a decade.

Prosecutors allege that while Taylor was president of Liberia, he used blood diamonds to fuel conflict in neighboring Sierra Leone and support rebel groups.

He denies the allegations and has pleaded not guilty to 11 charges, including pillage, sexual slavery and recruiting child soldiers, according to the United Nations.

The hearing is in The Hague, Netherlands.