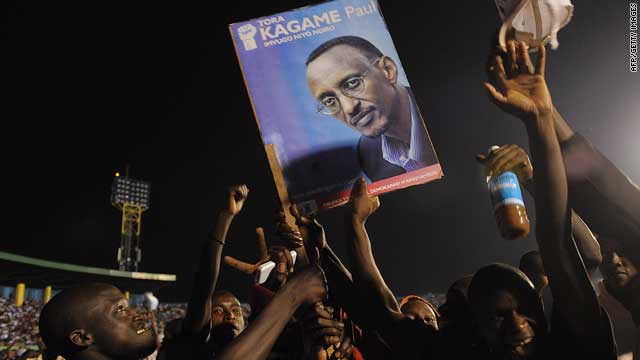 Turnout was registered at just over 95 percent, it said.

Electoral observers had expected the outcome, and Kagame claimed victory after early results gave him a huge lead in the nation's second presidential race since the 1994 genocide.

Observers said the voting was peaceful and "largely accurate."

Kagame welcomed the early results at a massive party Tuesday at the national stadium in the capital of Kigali. Thousands of supporters got free drinks and danced to live music.

"This is your victory, this is a victory for all Rwandans," Kagame said during the celebration speech, in vernacular Kinyarwanda. "Our development depends on you."

Human rights groups had expressed concern over violence and repression leading up to the vote, but Salim Ahmed Salim, chairman of the Commonwealth Observation Group, lauded the polling as transparent.

Video: Rwandans vote for president
This is your victory, this is a victory for all Rwandans
--incumbent President Paul Kagame
RELATED TOPICS

"Elections in Rwanda were conducted in a peaceful atmosphere," Salim said. "The count in the polling stations was transparent and conducted fairly."

But while the vote was highly organized and efficient -- thousands of people had lined up before dawn at polling stations across the country -- observers said Rwanda's democracy faces challenges that include issues of political inclusion and press freedoms.

"There was a lack of critical opposition voices," Salim said. "Each case appears to be different, but the overall impact is a concern."

Of three aspiring candidates, two are under arrest and another has fled to Europe.

Three other candidates cleared by Rwanda's electoral commission ran on platforms similar to Kagame's and praised him throughout their campaigns.

The only representatives at many polling stations were members of the ruling party, observers said.

"That, frankly, disappointed us," said Salim, though he placed responsibility on the opposition parties. "This right is a key transparency issue."

The vote comes 16 years after Rwanda's genocide left at least 800,000 people dead. Militias made up of ethnic Hutus slaughtered ethnic Tutsis and moderate Hutus nationwide in 100 days of violence.

In the aftermath, Kagame transformed his country, turning it into one of the fastest growing nations in Africa and -- in the view of some -- a model of economic and social development.

Kagame's administration has mixed patriotic rhetoric with strict rules in an attempt to recreate society, and recently changed the official language for schools to English, rather than French.

"Liberation is a process," said Tito Rutaremara, the chairman of Kagame's party, the Rwandan Patriotic Front, and also the country's ombudsman. "We want to create the nation."