From Josh Kron, For CNN 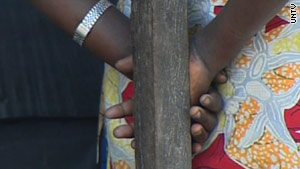 Goma, Democratic Republic Of The Congo (CNN) -- The United Nations peacekeeping mission in eastern Congo did not know about a rebel attack and mass rape in that region until more than a week after the events took place, a U.N. peacekeeping mission official said Wednesday.

But the account of the delay was disputed by a non-governmental organization.

Hundreds of Rwandan and Congolese rebels raided a network of villages in North Kivu Province between July 30 and August 3, gang-raping nearly 200 women, humanitarian officials said. A U.N. peacekeeper military base was within 30 kilometers (about 19 miles) of the general area of the attacks, in the town of Kibua.

"We had regular patrols in this area during that period," Madnoje Mounoubai, spokesman for the U.N. peacekeeping mission in the Congo, told CNN by phone from Kinshasa. "Unfortunately, the villagers and the local authorities never brought this issue to our knowledge.

"If we are not informed, it will be difficult for us to know," he added.

Although the U.N. maintains a number of peacekeeping bases in the region, Mounoubai said the U.N. troops in eastern Congo, known under the acronym MONUSCO, did not find out about the attack until August 12, and only after being informed by the International Medical Corps (IMC).

But Margaret Aguirre, an IMC spokeswoman, told CNN that her group informed the U.N.'s Office for the Coordination of Humanitarian Affairs about the rapes on August 6.

"Two hundred to four hundred armed men systematically pillaged and raped women in the villages," Giorgio Trombatore, country director for the IMC in the Congo, told CNN. He was among the first group of people to visit the site of the attacks.

"The rebels entered, tried to calm the population down by telling them they came for food and rest, and so [they] shouldn't flee," he continued. "Another group came at night and it was then they started harassing the population."

The rapes, by armed men, often occurred in front of the women's children and husbands, IMC said in a news release. "Large numbers of women reported being physically beaten before the sexual assaults, and some reported abuse of babies who were forcibly removed from their arms. The perpetrators simultaneously pillaged the entire village and smaller neighboring villages, before leaving."

So far, 179 cases of rape have been documented from the days-long event.

Ban has dispatched a senior representative -- Atul Khare, his assistant secretary-general for peacekeeping operations -- to the affected areas in and around Walikale, the town that served as the epicenter of the rapes, to meet with victims.

"The United States has repeatedly condemned the epidemic of sexual violence in conflict zones around the world, and we will continue to speak out on this issue for those who cannot speak for themselves," she said in a statement.

"The United States will do everything we can to work with the UN and the DRC government to hold the perpetrators of these acts accountable, and to create a safe environment for women, girls, and all civilians living in the eastern Congo."