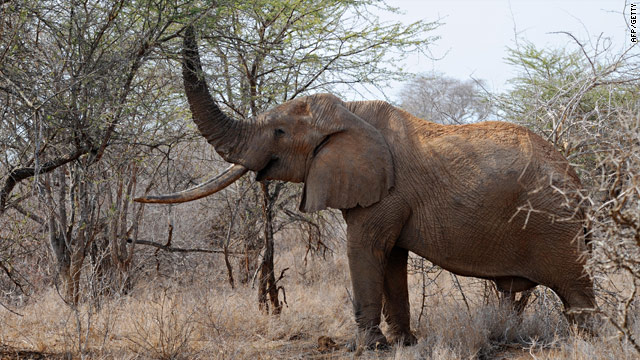 Elephants such as this one in the Tsavo West National Park in southern Kenya are threatened by poachers.
STORY HIGHLIGHTS
RELATED TOPICS

The man was seized on Tuesday with hand luggage, containing 10 ivory chopsticks and two bangles, according to the service. The trade in ivory both raw and finished is illegal in Kenya. The man pleaded guilty to possession of wildlife trophies.

It appeared the man was taking the finished products home for his personal use and is not an ivory trafficker, Paul Udoto, a spokesman for the service said.

Udoto said the arrest points to a general trend.

"Asian countries have an insatiable appetite for ivory and rhino horns," he said. "I don't want to single out Chinese people, but certainly China is leading the way."

The arrest came about a day after authorities confiscated two tons of illegal ivory and five rhino horns at Kenya's main airport.

A suspect was charged on Tuesday in connection with the case. He has denied the charges and was released on bail. Kenya's Wildlife Service said that several other suspects, including the owner of the consignment, were being sought.

The cargo was falsely declared as an avocado shipment. Authorities believe the tusks and horns were en route to Asia and were mostly collected from natural deaths over a period of 20 years.

"We suspect the owners had given up on waiting any further," Udoto said. "It was clearly a last ditch effort to get money for their investments, but they couldn't (get) through our airport."

Officials with the wildlife service wants a new wildlife policy fast-tracked that would provide for stronger sentences and interagency collaboration.

While anti-poaching efforts and an ivory ban has helped elephant herds recover in some parts of the continent, scientists in East Africa say there has been a sharp increase in poaching in recent years.