U.N.: More than 230 civilians killed in Somalia in recent weeks 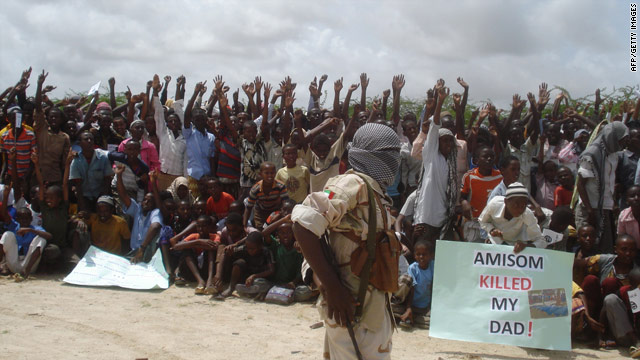 (CNN) -- More than 230 civilians have died in fighting over the past two weeks between Somali transitional government forces and Al-Shabaab militants in Somalia's capital of Mogadishu, the U.N. refugee agency said on Tuesday.

At least 400 people have been wounded and 23,000 displaced in the latest violence, the agency reported. So far this year, more than 200,000 civilians are believed to have fled their homes in the capital, it said.

"People who have been able to reach northern Somalia and neighbouring countries are mostly arriving on foot and by small buses and traveling without shelter. They tell our staff that the streets of Mogadishu are completely deserted and that people are too afraid to leave their houses. In these dangerous and difficult conditions, aid distributions are becoming rare and those who venture out are risking their lives," the U.N. High Commissioner for Refugees said.

The agency said people are leaving the capital for other parts of Somalia, such as Puntland, or to the neighboring countries of Ethiopia and Kenya, and across the Gulf of Aden to Yemen.

Somalia generates the largest number of refugees in the world after Afghanistan and Iraq, the agency said. At the end of August, there were more than 614,000 Somali refugees and over 1.4 million people displaced within the country.

"The collapse of the state, spiraling violence and anarchy, compounded by poverty, has led to one of the worst humanitarian crises in the world and unacceptable suffering of the civilian population," the agency said.

African Union troops from other countries have been helping the transitional government fight the Islamist insurgents, who are trying to topple the government.

In fact, Uganda recently said it is deploying an additional 750 peacekeeping troops to Mogadishu.

The increase is a fulfillment of the commitment pledged by the government of Uganda at the African Union Summit in July. The African Union agreed to send an additional 2,000 troops total to Mogadishu.

Djibouti and Guinea are also expected to send their battalions. When all parties fully deploy the pledged troops, the number of AU troops will increase up to 7,000, said Fred Opolot, Ugandan government spokesman.

"The increase in the troops comes as a response from the government of Uganda and AU to the recent attacks in Kampala carried out by Al-Shabaab," said Opolot, referring to the bomb attacks on World Cup fans in Uganda in July, which left as many as 79 people dead.