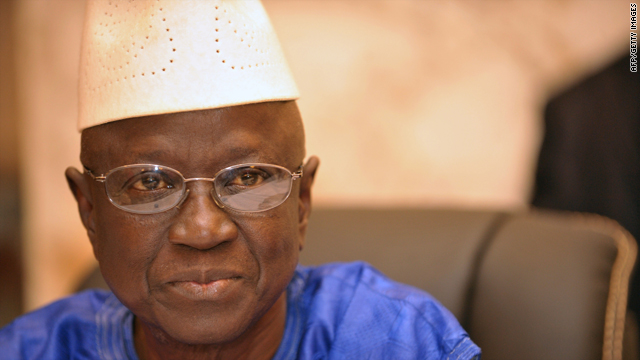 Conakry, Guinea (CNN) -- Guinea's presidential runoff election -- scheduled for Sunday -- hangs in the balance of a major political meeting Wednesday after the death of the head of the national electoral commission and weekend violence that reportedly killed at least one person.

The electoral commission head -- Ben Sekou Sylla -- had been convicted last week and sentenced to a year in prison for fraud in the first round of the election. He died Monday while in Paris, France, after receiving medical treatment for an undisclosed illness, according to Guinea state television.

All parties involved in the election's organization will meet in the capital Wednesday to discuss the feasibility of the fast-approaching election date, according to a communique read on television by senior minister Tibou Kamara.

The president of the transitional government, Gen. Sekouba Konate, is expected to make a decision about the date after the meeting.

Campaign activity in the West African republic remained suspended Tuesday after a temporary ban by the government was announced on state TV Sunday evening in reaction to weekend fighting.

The news of Sylla's death added pressure to a process in disarray. Sylla's conviction last week sparked the weekend violence.

The transitional government nevertheless reaffirmed its commitment to transparent elections.

"Under no circumstances would [the death] constitute a halt, an obstacle, another force against our common will to construct a democratic state and stable nation," said Kamara.

At a news conference Tuesday, Cellou Dalein Diallo -- president of the UFDG party and considered the leading candidate -- defended Sylla and called for a state funeral in his honor.

"Mr. Ben Sekou Sylla in his work as president of the CENI (Independent National Electoral Commission) made a quality contribution to the installation of democracy in our country. We ask the authorities of the transition to reserve a state funeral so the people can acknowledge his sad passing," Diallo said.

Candidate Alpha Conde of the RPG party, Diallo's election adversary, lamented the death of Sylla, but his party condemned what it saw as political gamesmanship.

"RPG and its allies denounce wholly any politicization of this regrettable loss of life," said Moustapha Naite, a spokesman for the RPG campaign.

Conde's party had brought the claims of fraud against Sylla to Conakry courts.

Diallo seemed open to the possibility that amending the election date might be necessary.

"If the CENI submits a schedule, a report, I would examine it with all objectivity required to take a position," he said.

"The candidates have the absolute right to demand that decisions made [by the government] are applied so that elections take place on time. But it is also the government's absolute duty to maintain public order," Dore said on state TV Monday evening.

Dore said one person was killed and 51 were injured in election-related violence over the weekend.

Diallo told CNN in an interview at his Conakry house Tuesday that one of his party's activists died from an injury sustained in violence over the weekend in the capital.

"On Saturday...[RPG militants] threw a club and the point hit the head of (the party member), who unfortunately passed away yesterday from the injury," Diallo said.

But RPG spokesman Naite denied that, saying the fatality occurred on the RPG side.

"Everybody said there was only one death, and that was in our compound," Naite said.

Officials of Guinea's national police were unavailable for comment.

Both candidates accuse each other of igniting the violence, but accept that the danger of ethnic violence looms large over the vote scrutiny.

The rival candidates are members of Guinea's two largest ethnic groups, the Peuls and the Malinke, and there are concerns that an election delay could provoke violence between the two groups.

The U.S.-based Carter Center, an election observer group, stated in a press release on its web site that "Guinea's upcoming runoff presidential election between candidates Cellou Dalein Diallo and Alpha Conde is critical to both the country's stability and that of the West African region."