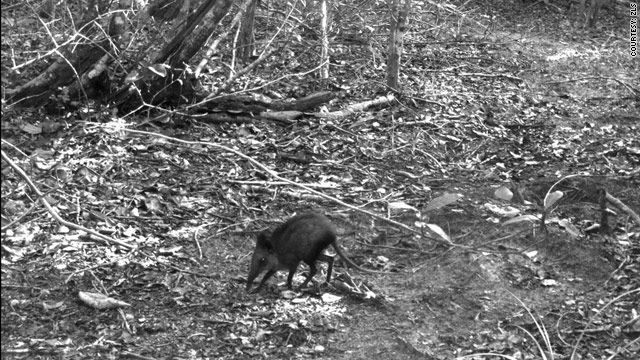 Scientists hope that DNA samples will prove the mammal photographed is in fact a new species of elephant shrew.
STORY HIGHLIGHTS
RELATED TOPICS

Nairobi, Kenya (CNN) -- A group of international and Kenyan scientists believe they may have discovered a new mammal species in a Kenyan forest near the Somali border.

"This is an important discovery," said biologist Dr. Rajan Amin of the Zoological Society of London. "The whole team was very excited to capture pictures of this mammal."

There are 17 known species of elephant shrew, all native to Africa. They got their name because of their bizarre flexible nose which resembles an elephant's trunk, and because of their superficial resemblance to true shrews.

The Zoological Society of London and Kenya Wildlife Service captured the images. Researchers hope DNA samples will definitely prove whether it is a distinct species. The discovery could help in understanding this coastal forest region, which has been difficult to study at times because of its proximity to Somalia.

"Prior to our study, the biodiversity of the Boni-Dodori forest was poorly understood as a result of limited access due to security and problems of poor infrastructure," said Sam Adanje of the KWS.

Scientists believe that if the shrew is found to be a distinct species, the discovery could bring more attention to East Africa's dwindling coastal forests.

"With their ancient and often misunderstood ancestry, their monogamous mating strategies, and their flexible snouts, they are captivating animals," said Galen Rathbun of the California Academy of Sciences. "It is always exciting to describe a new species -- a necessary precursor for ensuring that the animals are protected."

Elephant shrews are more closely related to elephants than to shrews, according to the KWS, which uses the alternate name, sengis.

"Sengis belong to an ancient group of animals that evolved in Africa over 100 million years ago, and share a common ancestor with elephants, sea cows, hyraxes, aardvark, tenrecs and golden-moles (the super-cohort Afrotheria)," according to the KWS.