By Joe Penney, For CNN 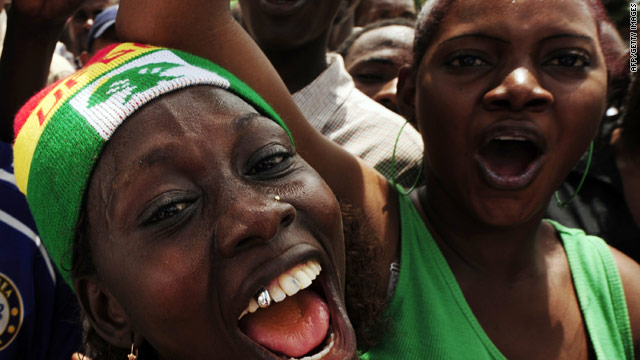 The announcement came after a meeting of all parties involved on Tuesday in Conakry, the capital, said CENI vice president Hadja Aminata Mame Camara.

Before the new date proposed by the CENI becomes official, it must be verified by junta leader and transitional president Gen. Sekouba Konate. He is currently in Mali attending festivities marking the country's 50th year of independence from former colonial power France, and is due back in Conakry Wednesday night or Thursday.

In a speech at Tuesday's meeting, Konate reaffirmed his commitment to a credible, transparent and democratic second round of elections.

"I must address the CENI by asking it ... to show it is equal to the difficult task entrusted to it," Konate said. "If it succeeds in its mission, Guinea will express its appreciation. If it fails, it runs the risk of provoking a crisis that will halt our democratic momentum and impede our country for years to come."

Guinea's battered electoral commission is faced with the immense challenge of making up for the irregularities of the first round immediately after its president, Ben Sekou Sylla, and planning director were sentenced to a year in prison for fraud. Sylla died last week in Paris while receiving medical treatment for a terminal illness.

By Wednesday morning, Diallo's campaign had gathered reporters to announce that it rejected Lounseny Camara's election, calling it "totally illegal and politically unacceptable," in the words of its representative, Sidya Toure. Diallo's campaign accused members of Conde's RPG party of being behind the vote.

Diallo's reaction was juxtaposed by Conde's nonchalant acceptance of the new election chief: "I don't have any comment, the CENI is independent, Lounseny Camara is a civil society member ... even if they elected a monkey, they're the ones who elected him and it's not our problem," Conde said to CNN and BBC Wednesday.

Lounseny Camara brushed off Diallo's charges of bias at a press conference Wednesday: "It his right as major political actor...to express his opinion of me. But I do not accept Mister Cellou Dalein Diallo's declaration that I belong to a political party."

The October 10 date is likely to test the CENI's capacity to overcome logistical problems, such as the distribution of new alphanumeric voting cards and the creation of more than 1,000 new polling stations. Guinea has a very limited highway system that is compounded by heavy rains that often flood roads and render them impassable.

"I think that that's a doable date, from what we've seen, and I very much hope that it gets confirmed. There's not a great deal of experience in running clean and fair elections in the country, but they stand a very good chance of running a credible election if they run it on the 10th," Harry Neuseld, director of the Atlanta-based Carter Center election-observing mission in Guinea, told CNN on Wednesday.

Nonetheless, "there is a lot of hard work still ahead," Neuseld said.

Guinea has been ruled by a military junta since the death of Lansana Conte in December 2008 ended his 24-year grip on power. Last September, security forces killed more than 150 peaceful protesters and raped dozens more during a rally against military rule, according to rights groups and the U.S. government.

Despite its reserves of gold, diamonds and bauxite -- the main ore of aluminum -- Guinea's 10 million people have a per capita GDP of just $1,000, according to CIA data.