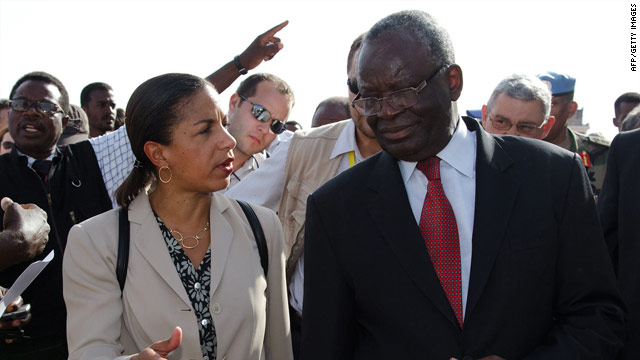 (CNN) -- Members of the U.N. Security Council Thursday wrapped up their visit to southern Sudan, underscoring support for the January referendum vote that could lead to the region's independence.

According to a Security Council diplomat, the 15 members are making the trip at a critical juncture.

A U.N. meeting last month called on the international community to respect the outcome of the vote in southern Sudan and Abyei if they meet stipulated criteria. Abyei is a disputed oil-rich city in the region.

"We are here to reinforce that message and the determination of the council to support you and all parties to the CPA [comprehensive peace agreement] in that process," U.S. Ambassador to the U.N. Susan Rice said Thursday, according to the U.N. mission in Sudan.

The delegation traveled to Juba in Southern Sudan to see an academy that will train police to safeguard the election, which could result in Sudan being split into two nations.

The peace agreement ended two decades of violence between the north and the south. The conflict led to the deaths of 2 million people, many from starvation.

The agreement would allow the autonomous southern region -- which holds a majority of the nation's oil -- to secede from the north. Fears that the process would cause more instability in the war-torn nation have sparked concerns among the international community.

"As the referendum draws near, the world will be watching Sudan," the agency said in a statement from Northern Sudan. "The UNSC needs to take this moment and focus not only on the issues affecting the southern referendum, but to support effective civilian protection in Darfur, promote the rights of the displaced, and to support an inclusive peace process in Darfur."

Council members this week were making stops in Kampala, Uganda, and northern and southern Sudan, as well as Khartoum and the volatile Darfur region. The delegation will complete its four-day tour of the country in the Khartoum on Saturday.