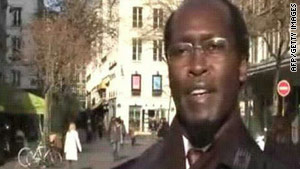 (CNN) -- A Rwandan rebel leader was arrested Monday in Paris, France, under an International Criminal Court warrant involving mass rape and other crimes committed in the Democratic Republic of Congo, the court announced.

Callixte Mbarushimana, a leader of the Democratic Forces for the Liberation of Rwanda, or FDLR in its French-language acronym, is charged with 11 counts of crimes against humanity and war crimes including rape, gender-based persecution and property destruction by the FDLR in 2009, the ICC statement said.

ICC prosecutor Luis Moreno Ocampo thanked authorities in France, Germany, Congo and Rwanda for their help in the arrest of Mbarushimana, calling it a "crucial step in efforts to prosecute the massive sexual crimes committed in the DRC," the statement said.

The ICC statement called Mbarushimana the first senior leader arrested for the atrocities in North and South Kivu provinces of Congo.

The FDLR comprises mainly Hutu extremists who fled to Congo after taking part in the 1994 Rwandan genocide.

The statement blamed the group for instigating war in Congo as part of its efforts to topple the government in neighboring Rwanda, and of attacking civilians in North and South Kivu provinces in 2009.

The ICC "is satisfied that there are reasonable grounds to believe that Mr. Mbarushimana, as Executive Secretary of the FDLR 'Steering Committee', has personally and intentionally contributed to a common plan of conducting attacks against the civilian population in order to create a 'humanitarian catastrophe' and to launch an international campaign to extort concessions of political power for the FDLR," said a separate ICC document issued Monday.