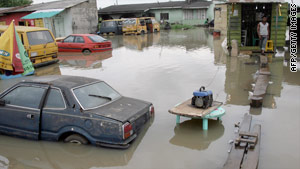 The flooding began last month when the Ogun River rose above its banks after the opening of a dam.
STORY HIGHLIGHTS
RELATED TOPICS

(CNN) -- Nearly 700 people in a small town within Lagos, Nigeria, will be moved to a relief camp due to heavy flooding that has plagued the region since September, according to a state governor.

Babatunde Raji Fashola made the announcement Monday while on a tour of flood-impacted areas.

In all, 681 people from the town of Ajegunle will be relocated to camps specially built for relief efforts, he said.

The flooding began last month when the Ogun River rose above its banks after the opening of a dam. No casualties have been reported.

While speaking to affected residents, Fashola emphasized that the area is in a flood plain and that people must be ready to move.

He said that the government alone can't solve the problem and they need help from everyone in the area to get through the flooding and limit the damage, asking residents to refrain from using flood-stricken roads.

"We have to wait for this water to subside," Fashola said. "Nature will take its course, but what we can do as a people is work together to mitigate the advanced consequences."

The commissioners for Special Duties, Health and Environment will work together with emergency management officials to relocate the displaced residents, Fashola said.