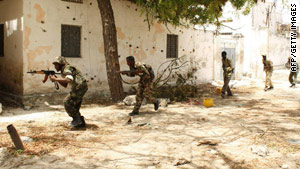 (CNN) -- Gunmen kidnapped two aid workers from a Somali town near the Ethiopian border, Save the Children said Friday.

The two -- a Somali national and a Briton -- worked for the organization and were seized Thursday night, the group said.

"At this point, Save the Children has no further information as to the whereabouts or well-being of their staff," the organization said in a statement.

The British Foreign Office said it was aware of the reports, and was "urgently investigating." It declined to provide any further information.

Save the Children is an international organization based in the United Kingdom. It works to improve the lives of children worldwide.

Somalia has not had a stable government since 1991, and fighting between rebels and government troops has escalated the humanitarian crisis in the famine-ravaged country.

"Save the Children was assessing the feasibility of starting up a humanitarian [program] to help malnourished and sick children and their families in the area," the group said in a statement Friday. "We are extremely concerned about the welfare of those being held and urgently call upon whoever is holding them captive to release them unconditionally."

CNN's Faith Karimi and Carol Jordan contributed to this report.