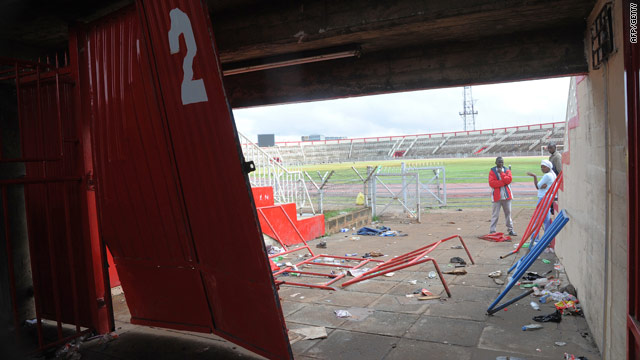 The entrance at the Nyayo National Stadium in Nairobi, Kenya, where seven fans were killed Saturday during a stampede.
STORY HIGHLIGHTS
RELATED TOPICS

(CNN) -- A stampede that killed at least seven soccer fans in the Kenyan capital started after a group without tickets tried to storm through a stadium entrance, a game official said Sunday.

The incident occurred Saturday at a Nairobi stadium where longtime rivals AFC Leopards and Gor Mahia were playing.

"Some people piled in one gate because they didn't have tickets," said Frank Okoth, a manager at Kenyan Premier League.

"It was raining heavily, and they found a gate with a weak structure, so they pushed through it."

Others waiting at the gate with tickets were affected, Okoth said.

The stampede left "many others injured," according to league officials.

"When the gate fell, people were pushed down," Okoth said. "Others stepped on them in their rush to get in. Hundreds of people stumbled on them again and again."

Okoth said he did not know how many people were injured.

"We are planning to meet with emergency and hospital services to get those numbers," he said.

League officials said during the stampede, an "agitated spectator" rushed into the field in the first half to alert game officials. The spectator tried to "get the referee to stop the match because ... people are being crushed to death," a statement on the league's website said.

At the time, an ambulance was at the scene attending to victims.

The match resumed after a temporary interruption. Gor Mahia defeated the Leopards, 1-0.

An investigation is under way, Okoth said.

The nation's league comprises 16 teams, including the two playing Saturday.