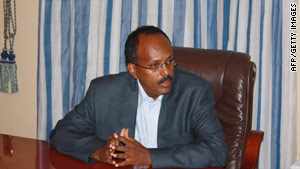 The Somali-American was tapped in mid-October to lead the largely lawless Horn of Africa nation.

Mohamed used to work in Buffalo, New York, as a regional civil rights manager for the New York State Department of Transportation, the president's office said.

He vowed Sunday to "move with full speed to do the people's business. I will very soon form an effective and dedicated cabinet that will put the Somali people first," the president's office said.

Of the 392 lawmakers attending the session, 297 voted for the new prime minister, 92 voted against and 3 abstained, the president's office said.

The prime minister will take the oath of office and form his cabinet in the next few weeks.

He takes over the leadership of a country that is a base for international piracy and was recently rated the most corrupt country in the world by Transparency International.

Mohamed got a masters' degree from the State University of New York at Buffalo, and taught at Erie Community College.