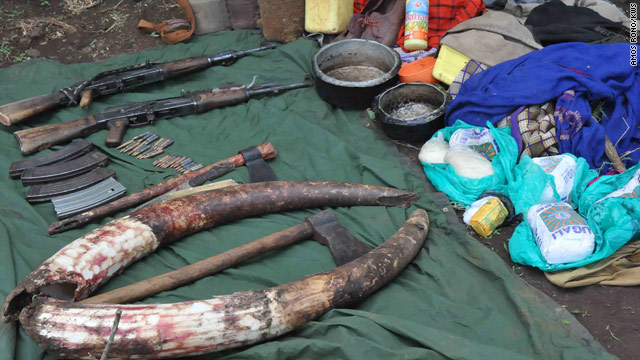 Tools and rifles were confiscated by Kenya Wildlife Service rangers in an exchange of gunfire with ivory-poaching suspects.
STORY HIGHLIGHTS
RELATED TOPICS

Nairobi, Kenya (CNN) -- Two suspected ivory poachers were in custody and three others were killed by Kenyan authorities in the past week in a pair of incidents, the Kenya Wildlife Service said Monday.

Five elephants also were killed in the incidents, the wildlife service said in a statement.

In the latest skirmish, a suspect was killed Sunday night while exchanging gunfire with wildlife rangers on the outskirts of Meru National Park in Isiolo County, the statement said. Another was arrested in the town of Isiolo.

The rangers ambushed the suspects, who allegedly were using axes to hack off an elephant's tusks after shooting it to death, the wildlife service said.

"A major operation has been under way since dawn to arrest more suspects on the run," the statement said. "They are believed to have sustained injuries from last night's shootout."

Authorities recovered two AK-47 rifles, 30 rounds of ammunition and 16.5 kilograms (36 pounds) of ivory after the incident in the Garbatulla District of Isiolo County, the wildlife service said. Four magazines also were recovered -- three for AK-47s and one for an M-16.

A wildlife ranger was injured in the right shoulder during the exchange of gunfire. Abdi Gimbe, who is based at Meru National Park, was initially treated at a hospital but later was flown to Nairobi for treatment.

Another poaching suspect was in custody in the town of Voi, near Tsavo East National Park, after an incident Tuesday, the wildlife service said. The suspect, arrested Saturday, was being questioned about the killings of four elephants in the Galana Ranch area and an illegal firearm found in his possession, authorities said.

Two of the suspect's alleged accomplices were shot when exchanging fire with wildlife rangers and three others escaped, the wildlife service said. An AK-47 rifle was recovered.

Authorities recovered two pieces of ivory buried in sand and five more pieces in the suspects' possession, the statement said. The suspect arrested Saturday had walked some 100 kilometers (62 miles) from the scene of the incident, and was found with a G3 rifle and three rounds of ammunition, the wildlife service said.