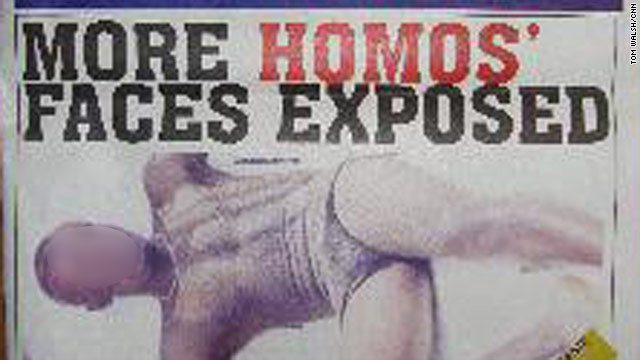 Second edition of the newspaper outing gays and lesbians carries an image of a man (identity blurred by CNN).
STORY HIGHLIGHTS

(CNN) -- A judge temporarily ordered a tabloid in Uganda to stop publishing lists identifying people it claims are gay after an advocacy organization filed a lawsuit.

The order came a day after Rolling Stone -- which has no relation to the iconic U.S. music magazine -- published a list of people it said were gay, urging readers to report them to police.

In the last edition, the newspaper promised to list 100 of what it called the country's top gays. The first edition listed several gays and lesbians, with photos and addresses alongside a yellow banner reading "hang them."

In the temporary injunction issued Monday, Justice Musoke Kibuuka ordered Rolling Stone from further publication of names or pictures of anyone "perceived by the respondents to be gay, lesbian, or homosexual in general."

The head of Sexual Minorities Uganda, which filed an invasion of privacy lawsuit against Rolling Stone, praised the judge's decision.

"This is a lesson. At least the law has shown some intelligence. It shows the media cannot invade other peoples' rights and violate other peoples' privacy," said Frank Mugisha, the organization's chairman.

The next hearing in the case is scheduled for November 23, said Giles Muhame, the tabloid's managing editor.

"We will abide by the ruling and will not contest it. We were told we cannot publish any information that can lead to identification of homosexuals," he said. "Meantime, we shall continue condemning homosexuality, without publishing pictures."

Gay rights groups in Uganda have said at least four people have been attacked since the tabloid published its first list.

Muhame denied that anyone has had to go into hiding because of the list.

A bill that would make homosexuality potentially punishable by death is working its way through Uganda's parliament.

While that's an extreme view to many, in Uganda even this sentiment holds some weight. Uganda is a mostly Christian country where local and international, particularly American, evangelicals hold great sway.

"We are very proud of what we have done," Muhame said in Tuesday's interview with CNN International.